iOS 8.1.1 was finally released yesterday following the beta version, although it was only a minor update to resolve some issues with older devices, such as the iPad 2 and the iPhone 4S. Before we even started to look at whether the problems had finally been addressed there are concerns with its install size.

One of our readers said the install size was a massive 2GB for iOS 8.1.1, while another said it was only 64.1MB. We can see why there is a discrepancy, as that larger size would have meant he probably had the beta installed. What was the size of your install? 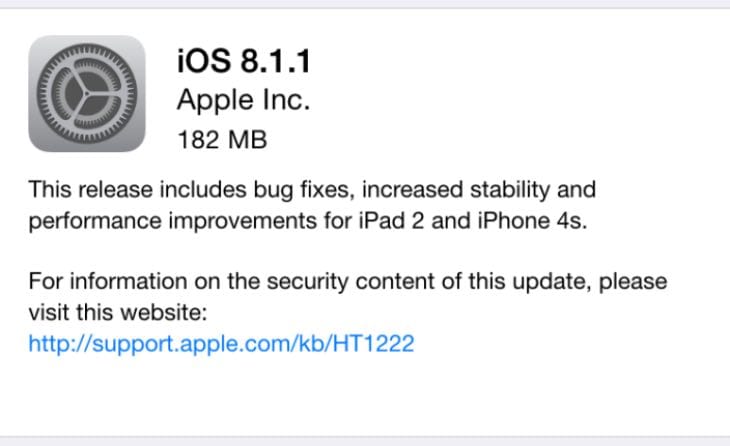 We have already heard from several iPhone 4S owners and they agree that there are vast improvements since this latest update. When they used to go from the Home Screen to an app there was a significant delay, but now the response is so much faster. You are now able to have one app running while opening another, as this was not possible before.

The original iPad mini is also much faster, which means Apple must have made some improvements to memory allocation with the latest update, and there are no longer any WiFi issues.

Not all good news – We are still hearing that a small percentage of people that upgraded to 8.1.1 are still having issues, as there are reports of some iPhone 6 owners still not able to get a decent WiFi connection, and also a few iPad 2 users are still expirecing greatly slowed performance, much the same as the previous version.

How has this latest update been for you, as we have not had any issues with any of our iOS devices since the update?