Apple’s iOS 7 Control Center aimed to make it much easier to access certain features within one or two clicks, but Apple made sure they kept a lot of control over the settings just like most of iOS 7. One of the features some people love with Android is customization, although this isn’t for everyone and we’ve heard about users finding everything too complicated and prefer the simplicity of iOS 7 for iPad and iPhone.

How much control you want of your mobile device settings will vary from user to user, but you will always find a few that love the features in iOS 7 although they want a little more customization.

Rating the iOS 7 Control Center features – everything is pretty similar on iPad and iPhone, apart from a few cellular differences, and this new feature is certainly a step in the right direction with iOS 7.

One user decided to give their review of the iOS 7 Control Center and explain a few things that were needed, as an improvement although some of Product Reviews readers will debate the need for such change. One feature this user wanted was to see an “individual configuration” of the iOS 7 Control Center that might be offered after using a tap and hold gesture for a drop-down menu with new personalization functions. 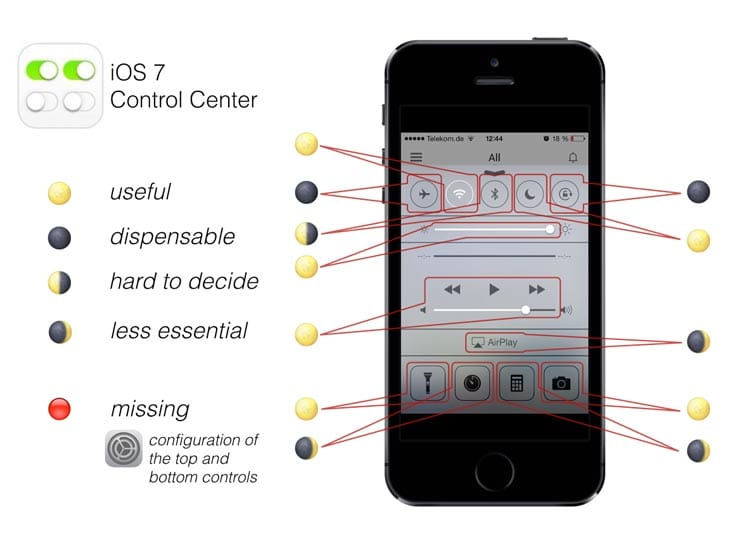 You can see the image above that this Google Plus user shared, found on Thomas Unterstenhoefer’s page here, and they highlight the need for a control to activate and deactivate Cellular Data. This would be useful to some people and could be added or removed by user choice in iOS 8, or with a future update to iOS 7.

How would you change the iOS 7 Control Center on iPad and iPhone? Take a look at Thomas Unterstenhoefer’s personal rating in the image above, and then share a comment below with what you love or hate about this area of iOS 7.

You can see a demo of iOS 7 AirDrop within a video we featured back in September.