The iOS 7.1.2 release date was said to have been back on May 21st, but that date has been and gone, next there were rumors suggesting a release during WWDC 2014, alongside the first iOS 8 beta. We had a feeling this would not happen seeing as though it hasn’t been that long since the current 7.1.1 version was released.

Checking the update menu — I cannot tell you how many times I check the update tab, as it is several times a day. Okay, so I know that it would be better to wait, but I’m not the only one because lots of people check the update tab everyday in the hope of being sprung a surprise.

The thing is, there are still several problems with iOS 7.1.1, such as the battery life drain, and it is the hope that Apple finally gets on top of things and offers a fix, but the chances of that happening are slim to none.

Apple has had long enough to solve this ongoing issue, although it is worth noting that this is not an issue for all iPhone, iPad and iPod touch owners with iOS 7.1.1 installed. 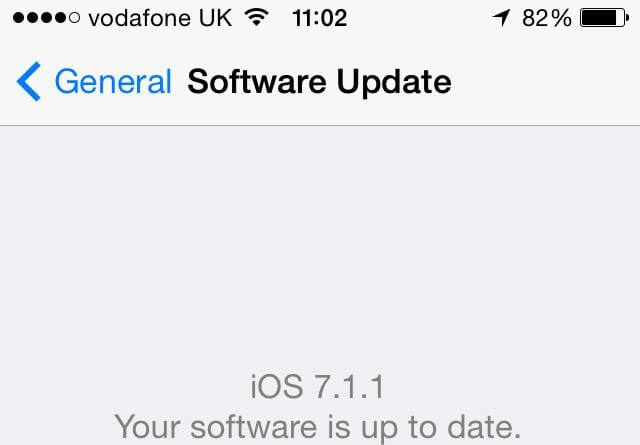 Two other iOS 7.1.1 problems due to be addressed with iOS 7.1.2 include the email attachment encryption issue and the iMessage issue.

Apple already released a statement saying the email problem will be addressed with the next update, and as for iMessage, it would seem that things have gotten much worse recently and so the iOS 7.1.2 download is very much needed.

How often do you check the update menu?