We are installing the iOS 7.0.3 50.5MB iPad mini update right now and the tagline explains there will be bug fixes and improvements, although this is the standard message with most of Apple’s updates.

Apple iOS 7.0.3 update release notes — if you want to see exactly what has been fixed with the latest software update, then you can see the notes below but feel free to let us know in the comments if your problems were featured in the list. 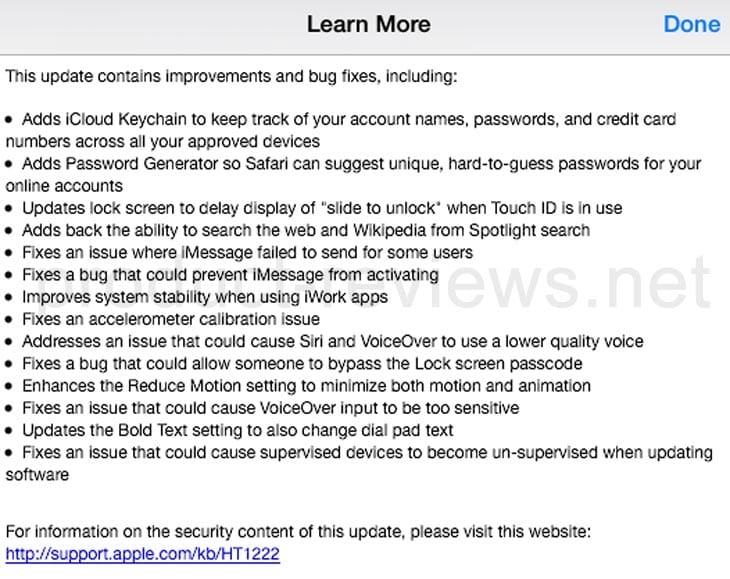 The main items listed include a fix for supervised devices that become un-supervised when being updated, changes to the bold text setting, fixes for VoiceOver input becoming too sensitive, improvements to the Reduce Motion setting, and a fix to the Lock Screen passcode bypass we saw in the iOS 7 Gold Master.

If you experienced any problems with the accelerometer when trying to calibrate, then these issues should be fixed with the iOS 7.0.3 update. Apple’s iWork apps will perform better thanks to system stability fixes, and new features include a Password Generator added so Safari can suggest unique passwords along with an iCloud Keychain beings added.

Finally, a fix for iMessage failing to send — the iOS 7.0.3 update release notes also list a fix for problems where iMessage failed to send texts, videos or images. Time will tell if this has truly been fixed, as with previous software it took a few updates to completely solve some problems.

If you are running iOS 7 on an iPhone or iPad that has problems with iMessage, or sending text/images, then please leave a comment detailing how things are after installing the iOS 7.0.3 update.