There are lots of reasons as to why it is better getting the iOS 6 jailbreak from veterans in the iPhone hacking field, and it’s easy for newcomers to not understand when something smells fishy. When it comes to certain veterans, like pod2g, then you know you can trust a jailbreak for iOS 6 a lot more than these growing influx of scammers.

Earlier this week, confusion spread amongst eager iOS 6 owners hunting for a jailbreak, as there were reports of an untethered iOS 6 jailbreak emerging online, but only for those willing to pay a fee for it. The asking price for that was $25 and as you can imagine, consumers were not impressed by having to pay for software that is traditionally a free download whenever available.

This has prompted cries for the so called jailbreak ‘veterans’ to speed up their efforts in bringing a free iOS 6 untethered jailbreak to users, but you may be disappointed to hear that one of the key members of the underground community doesn’t appear to be interested in the project at the moment.

Pod2g is known for bringing the Absinthe iOS 5.1.1 untethered jailbreak to users and many thought that he would be working on an untethered jailbreak for iOS 6 as soon as the iPhone 5 was released. Unfortunately though, he has said that his current job is taking priority at the moment, encouraging other developers to come up with ideas at the forthcoming jailbreak conference event. 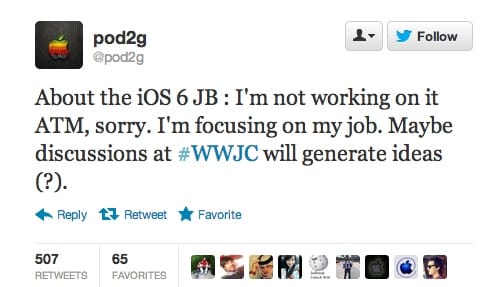 On a more pleasing note though, the iPhone 5 has officially been jailbroken, with the honor going to another jailbreak veteran by the name of Grant Paul otherwise known as Chpwn. He has provided a few screenshots showing the Cydia icon installed on the taller iPhone 5, but no download links for the moment – meaning that it is currently unavailable for those wishing to jailbreak their iPhone 5 devices asap.

So now that the jailbreak has been achieved on Apple’s latest iPhone, all users have to do now is sit back and wait for the same individuals to come up with working iOS 6 untethered jailbreak software. In the meantime, don’t be surprised if we see even more situations where certain companies are claiming to offer an untethered jailbreak for a price.

Are you going to hold off from paying for a jailbreak, in favor of waiting for a free version from a respected developer? Considering that the iPhone 5 was cracked open from day one, we doubt that you’ll have to wait very long.