Most Apple fans come to expect a certain amount of errors with new software by now, and now that we’re hearing about a number of iOS 6 problems it hasn’t surprised us, although some users are not happy with the issues they’re meeting when using iOS 6 features like Passbook and Maps. We’ve also heard about bugs that turn out to be much less of a problem, and this included the Wi-Fi problems some people experienced with iOS 6 that were simply web related.

Early iPhone upgraders to iOS 6 met a couple of problems yesterday when testing the new software, and one of these included issues accessing Wi-Fi. Users were met with a redirection to the official Apple website, which showed a login screen rather than allowing them to use their home Wi-Fi or various networks outside their home.

After a barrage of comments in forums it seems the problem had been fixed within hours, which had been thanks to Apple making a tweak online that clearly showed this issue was web related rather than with the iOS 6 firmware. You can read some of the user comments in this article, although we’d love to know if you experienced this problem with iOS 6 yesterday?

Problems with the Passbook app in iOS 6 — one of the more prominent iOS 6 features is Passbook that makes using an iOS device more efficient thanks to having all your passes in one place. This feature is certainly a step in the right direction for making our physical wallets/purses extinct, but some people are noticing early teething problems.

You might run into an issue when opening Passbook and trying to connect to the App Store for a list of supported apps, which is thanks to an error message explaining a problem with connecting to the iTunes store. It seems that Apple will need to release another iOS 6 update to correct this problem, but for now there’s a simple fix that involves setting the date and time ahead by one year after turning off automatic. You’ll find “Date & Time” in General under Settings, and once you make this change and have visited the Passbook app, just set the time and date to automatic again. 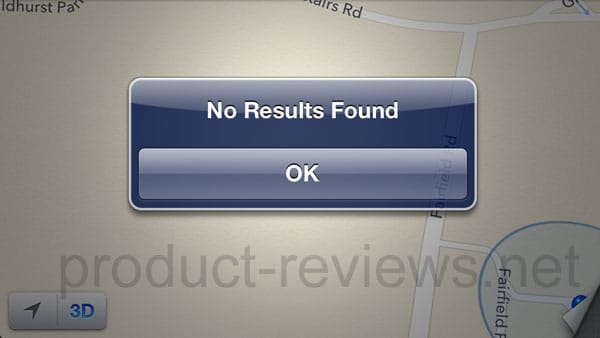 Apple’s new iOS 6 maps experience teething problems — our first impression of the new maps had been one of excitement, and while we loved the 3D and responsiveness of the new UI, it isn’t good to find a lot of places missing and also being met with a “cannot find” message for popular landmarks and places. This article takes a detailed look at the problems with iOS 6 maps, although pointing out that Greenland is now somewhere in the Indian Ocean and directions are sending people down dual carriageways the wrong way quickly shows the severity of this issue.

Apple has delivered some major improvements with iOS 6 and we love most of the new features, but there are also a large number of issues with key features that need fixing as soon as possible. How have you found iOS 6 maps, Passbook, and other features so far?