It couldn’t be truer that people will spread the word about iOS 6 problems more than the good things Apple’s new software does, and this is the same for most products and services. If you are unhappy with something you’ll want to tell everyone about it, and the bugs in iOS 6 are spreading across the Internet much faster than all the good things we’ve found after our hands-on with the new iPhone 5 features and iOS 6 upgrade.

Apple’s new iPhone 5 features are subtle — there are a number of improvements with the new iPhone 5, see Galaxy S3 vs. new iPhone here, but after using the device since launch it seems the biggest changes are with the design and not with innovation. If you had an iPhone 4 that just ended on a contact then an upgrade to iPhone 5 would seem a no-brainer to most people, but if you’re on a 4S you might be waiting until the new model in 2013. In a nutshell we love the lighter design that also offers a smartphone running considerably cooler than the iPhone 4S/4, although most of the improvements noticed can be gained by upgrading to iOS 6.

iOS 6 problems — we’ve noticed a few features on our iPhone 5 not working correctly and we’re also hearing similar issues with previous generations running the new software. Airprint hasn’t been working that well in iOS 6 for us, which we noticed when using a Netgear router that allowed for better Airprint support with printers. Safari has been a bit temperamental at times, and there are numerous issues with Wi-Fi on certain home networks. LTE seems like a great iPhone 5 feature although UK users might not think so, especially considering there are many black spots still for 3G let alone a new 4G service.

YouTube removal and Apple maps — some iOS 6 problems are meant to be and this includes YouTube not being included, which in our opinion had been a good move by Apple. If you’ve downloaded the new app for YouTube then you’ll notice a lot of new features, which we find a much better option on our iPhone 5 rather than the features seen in the old app. The same can obviously be said for other iPhone models thanks to this removal being a change made to all devices running the latest mobile OS.

Apple maps look good at first glance and after our 2-hour test using turn-by-turn we were very pleased with the new maps from Apple, although as most people would have seen by now the maps are filled with bugs. This can be seen by towns being in the wrong place, and some people claim whole countries not being where they should. The 3D view looks amazing but also includes glitches with roads and other structures. The problems with iOS 6 maps are so vast we’ve seen Apple issue an apology and promise to fix the issues in time. 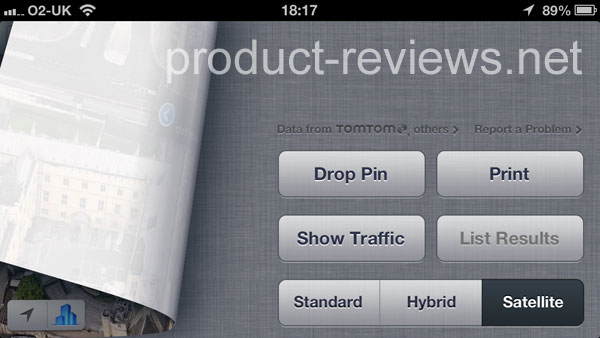 Report iOS 6 map problems — Apple has made it clear that the software will get better over time, some people feel it should’ve been released as a beta or even at a later date, although it is worth pointing out maps can get better faster with users reporting bugs. One way to improve iOS 6 maps would be to click the page curl at the bottom when you see an issue, and then on this page click the “report a problem” link. After clicking this you will be greeted with a few options that you can choose from before clicking next, which include reporting a problem with satellite images, directions, search results being incorrect, or even explaining something that isn’t listed.

Do you want to help Apple improve iOS 6 maps, or do you feel these problems should be for Apple to fix without your help? Some of us like to go out of our way to help the software we use get better, although it’s true that this isn’t for everyone. Have you noticed any features in iPhone 5 not working as they should, and if you are running a different model of iPhone with iOS 6 have you noticed something that shouldn’t be? Battery life is certainly one issue we’ve heard a lot about from certain users, although our battery seems to drain as normal on the iPhone 5.

One of the iPhone 5 features thousands were looking forward to had been the new maps that came with iOS 6, and it seems the problems experienced are certainly killing this feature for some needing turn-by-turn directions without buying a separate app. Not to mention the issues that have been reported with directions sending people the wrong way and in some circumstances putting these people in danger thanks to focusing too much on the map software. How are the new maps performing for you, and would you fully trust map software to get you to places safely?