Apple may not be willing to give a timeline yet on their long awaited improvements to iOS 6 Maps, but users will be pleased to hear that new alternatives are now starting to emerge from competitors. Google’s revamped Maps for iOS 6 isn’t quite ready yet but there is now one option from an unlikely rival which you may want to try out while waiting.

It comes from none other than Nokia. You would assume that the company would be focusing solely on the Nokia Lumia 920 and giving that device the support it needs to make it one of the leaders on the market. Instead though, Nokia has seen an opportunity or maybe weakness in Apple’s current maps offering and have released Nokia Here onto the App Store.

The app appears to have had no problems getting approval for the iOS App Store either, as Nokia Here is now available to download now in all countries for free. iOS 6 Maps from Apple obviously needs a lot of improvement, with Tim Cook even admitting it himself, but if you were hoping that Nokia Here Maps would offer an instant tonic – sadly we have to say that definitely isn’t the case.

Nokia Here doesn’t appear to be quite ready for a public release yet, either that or Nokia has just released a very sluggish Maps app on iOS 6. The interface and the resolution itself is far from perfect and zooming in to a particular area just looks plain ugly and takes a considerable amount of time to load. 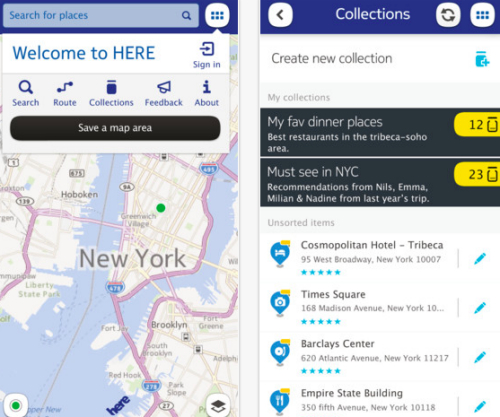 Even then, some of the data that Nokia Here does produce even appears to be incorrect- if that’s possible. We tested the app here in Hong Kong and found that Nokia Here had magically discovered multiple new bus stops and each one of them were named incorrectly as well. Obviously the data searching will be different in your area but we have already read feedback online that Nokia Here is bringing back inaccurate data – which is a massive issue if you are attempting to use the software when away from home.

Nokia had a great chance to steal the limelight from Apple and make Here maps the number one choice for mapping solutions on iOS 6 – well perhaps until Google Maps is ready at least. Instead though, you are probably better off sticking with Apple’s version for now, which is a big shame.

Have you had a chance to try out Nokia Here maps on iOS 6? Let us know your initial impressions of the app and whether you had problems using it too.