As we enter the busy Thanksgiving weekend, iOS users still do not have the iOS 6 untethered jailbreak for the iPhone 5 that they had hoped for as the perfect gift. Some new details have emerged within the last few hours, citing one iOS 6 hacker who isn’t afraid to stop working on the software once the new jailbreak DMCA rules come into effect, making a jailbreak for devices like the iPad 4 illegal.

It’s fair to say that the jailbreak process for iOS 6 is taking longer than expected – both for eager consumers and for the developers / hackers that are trying to crack Apple’s reinforced code. Today we have some interesting information to share with you, coming directly from p0sixNinja – a hacker formerly associated with the Chronic Dev Team, who have been responsible for software such as GreenPois0n in the past.

He has updated his Twitter account to reveal that there are no plans to stop attempting to jailbreak the iPad 4 or any other device for that matter, as soon as the new DMCA rules are brought into place as explained in our previous article here. P0sixNinja has revealed that an original exemption never stopped them before and now the rules have been set in place – hackers can’t be scared to ‘bend or break these rules.’ 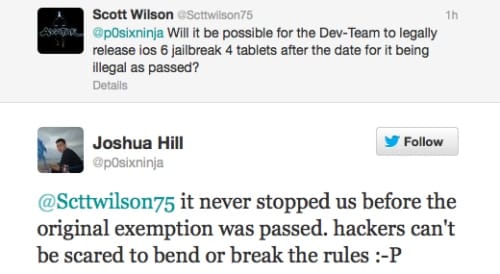 Additionally, we also get a little insight into the sheer task that these iOS 6 developers are facing, as he also reveals that Apple’s protections within iOS 6 are ‘ridiculous’ and are locked up to an extent which they haven’t seen before on previous iOS releases.

We also get a reminder that the iOS 6 untethered jailbreak release is going to be a ‘long slow process’. We’ve said before that we didn’t think the jailbreak would be released before the end of the year and now it looks like we may have to wait until 2013 for some progress instead.

Of course, these are the thoughts of one iOS 6 hacker only, as there surely are plenty of others who are trying to achieve the same goal. What are your thoughts on the process continuing after the DMCA has made it illegal?