Apple normally like technology websites talking about their products and services, but when it comes to the iOS 6 issues being reported it seems that there has been enough publicity, which mainly focus on the new maps within iOS 6. Problems have also been noted with the iPhone 4S battery and it seems that some people are experiencing massive loss of battery life within minutes not hours. These iOS 6 bugs need fixing and some users want stop spreading the word until things are dramatically improved.

Most recently we’ve heard from PR readers pointing to facts and figures for the battery on a number of devices running iOS 6, which included both the iPod touch and iPhone 4/4S. The loss of juice has been stated to be as much as 15% an hour for some iPhone users, and today we note an iPod user losing nearly all their battery life within a couple of hours. If you want more proof then visit this article, which includes dozens of cases reporting iOS 6 issues related to battery.

Motorola has turned to popular social network Twitter for some sarcastic remarks about the iPhone 5 problems, especially those experienced by the majority of iPhone users installing iOS 6. Issues that these users are experiencing are being made viral not only by the users themselves, but also by a new Motorola advertisement that includes the term “#iLost“.

You can see this advertisement in the image below, which shows the new iPhone 5 / iOS 6 maps next to maps on a Droid RAZR M. It is fair that the iOS 6 map issues are no laughing matter for iPhone users, but we’re sure the same can’t be said for Android onlookers that are most probably enjoying this news and laughing at the Motorola Ad. 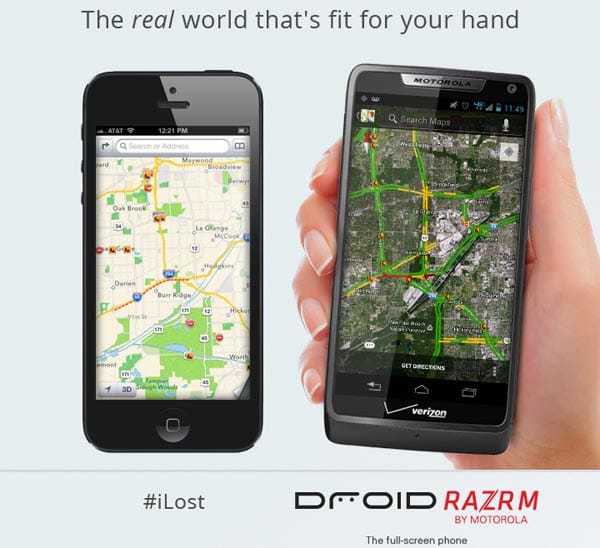 What do you think about the poor reviews for Apple’s new iOS 6 maps? Did you expect this feature to fail in this way, and if you have been hands-on, like we have, do you agree that these problems are likely to be fixed pretty quick with a number of updates? Feel free to read about the lack of exclusive iPhone 5 features here, although capturing photos and video simultaneously is exclusive for iOS 6 with iPhone 5, and you can expect some people to jailbreak the iPhone 5/iOS 6 devices to solve a number of issues including putting Google maps back. There are some jailbreaks on offer already, although solid support with safer versions will be due in the coming weeks.