When it comes to understanding exactly where we are with the iOS 6, 6.01 untethered jailbreak it seems that there’s just one place to look, and this is the Twitter accounts for a few select individuals. The majority of these hackers and security researches also keep in contact via tweets as well, which most of their messages are sent for public consumption. These make great reading material and help to understand what’s going on when it comes to an iPhone 5, 4S jailbreak when running iOS 6 or iOS 6.01.

One of the most active iOS hackers on Twitter is Joshua Hill, aka p0sixninja, and this is certainly one account you should keep a track of if you’re serious about finding an iOS 6 / 6.01 untethered jailbreak. You can see Hill’s latest tweets here, which includes some messages traveling back and forth with a well-known jailbreak reporter going by the name of cammywrites on Twitter. One of the insightful Twitter conversations can be seen in the tweet below, which saw Hill put a few people in their place over the number of exploits needed to be found in a bootROM for an iOS 6 untethered jailbreak “for life“. 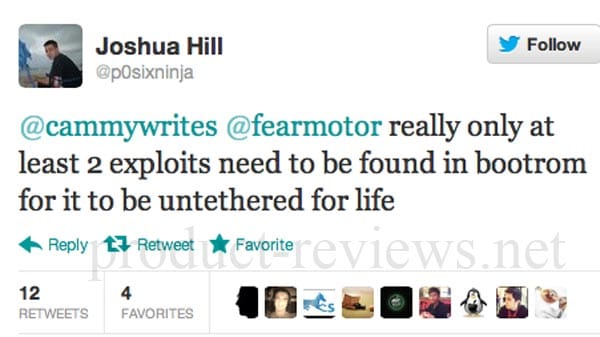 You can see this full twitter conversation via this page. This topic goes back to what we reported before about Hill not being involved in the iOS 6 jailbreak for iPhone 4S / 5, and the fact that he is working on something much bigger, which you can read about in this article from a few days ago. The Twitter conversation also explains the reason why the old bootROM on 3GS is always untethered, and this would be the goal for the new iPhone 5 if something has changed hardware wise from the iPhone 4S bootROM, which is what Hill is looking for rather than a normal iOS 6 jailbreak that could be patched with a future update.

Do you understand why Joshua Hill is looking for something more permanent when it comes to an untethered jailbreak for iPhone 5 and 4S? It is also worth pointing out that while Hill is working on this, there are other people from the closed circle looking at a quicker iOS 6 jailbreak, but at this time there’s important pieces missing. You might want to read about the iPhone 5 jailbreak being something niche buyers are waiting for before they’ll part with cash for the latest generation of iPhone.