When updating your iOS version on your Apple device you are probably looking forward to the new features and improvements it will bring, however one iPhone user’s charger cable caught fire shortly after carrying out the iOS 5.0 update, prior to this he claimed that his iPhone 4 was running worryingly hot.

You can see @guspinto tweet which revealed this news here, at the bottom of this post we have embedded an image which clearly shows the iPhone charger cable disfigured due to melting. This is not the first time this has happened, back in 2008 a thread was set up on MacRumor’s forums, here lots of people complained of a similar problem, surely this needs to be looked into by Apple.

Gus Pinto says that iOS 5 had been installed on his iPhone 4 for at least nine days before the incident occurred, therefore it was not something which instantly took place after the upgrade took place, as RegHardware point out lots of people have reported that the longer you charge the phone for the hotter it gets, therefore we doubt that this news will surprise some people.

We looked into things a little deeper and can confirm that the cable which melted was the USB cable which shipped with the iPhone 4, Pinto suggests that he does not necessarily think that iOS 5.0 caused the issue and says that it could just be a faulty cable.

Many believe that the fifth-gen iPhone will features a dual-core processor and a thinner design than last year’s iPhone 4, if this is the case Apple developers / manufacturers will have their work cut out to ensure that the smartphone runs at an acceptable temperature, if not we wonder whether this kind of problem will be more common for the iPhone 5. Perhaps one way round this will be to introduce a new way of charging, wireless charging via a dock could be the answer, we think that something similar to Palm’s touchstone dock would be good.

If your iPhone 4 runs worryingly hot whilst charging we suggest either trying a replacement charging cable or perhaps only charging it for a couple of hours at a time, we also recommend that you charge it somewhere which is not surrounding by flammable objects such as aerosol cans etc.

Does your iPhone get very hot whilst charging? If so, do you think that Apple need to address this issue? 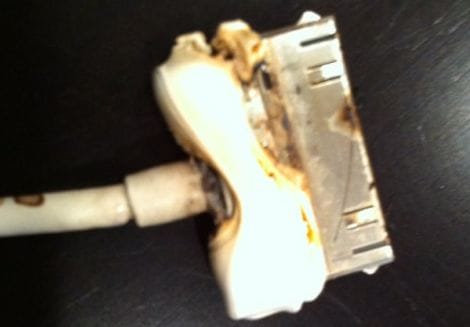