We haven’t even seen the release of iOS 4.3 yet for Apple devices, but now we have some details on a new major feature that could be featured in iOS 5 – Apple’s next major revision of their operating system for mobile devices and tablets.

The feature that has been leaked and is thought to be due for a reveal at Apple’s iPad event on March 2nd, is a brand new keypad lock feature, as it looks as if lock screens on iOS devices will be given a brand new makeover – Google Android style!

9to5Mac has obtained various images which show you exactly how the new lock screen will look on the likes of the iPhone, iPod Touch and iPad. Just like the Android lock screen, you’ll now need to input a code on a 9 dot pattern by swiping your fingers in a unique way. For those of you who haven’t seen this on Android, it’s a fairly smart idea and it’s no surprise to see Apple borrowing this feature to tighten up security on their devices. 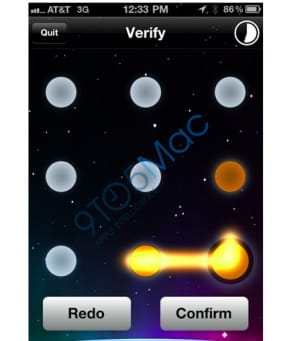 What are your thoughts on this potential new feature? Would you prefer this new lock screen instead of the four digit password? It will certainly be a lot more interesting inputting this pattern everytime on your iPhone for example, and maybe even quicker as well once users get familiar to this stroke style lock pattern which Google has used for years.