We have some important news for those of you planning to install iOS 5, either on a standard iPhone or one which is jailbroken. New evidence from the iOS 5 beta has revealed that Facetime over 3G may be activated, but with certain pending factors.

As most of you are well aware, Facetime is only available via a WiFi connection at the moment, which is probably one of the most frustrating aspects of the iPhone as a whole. On the bright side, the news of Apple adding Facebook support over 3G will be most welcome, as the included screenshot courtesy of 9to5Mac suggests: 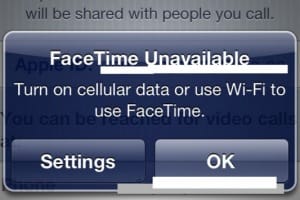 However, a few factors need to be taken into account if this feature does become available in iOS 5. The first, is that it is likely to be dictated by carriers, not Apple. That can only mean bad news for users, as some carriers may opt to issue extra fees to use Facetime over 3G, much like they did with tethering – hopefully that’s just a worse case scenario and it will be free though.

Another factor to consider, is that those of you with jailbroken iPhone 4 or 3GS may not get to use Facetime over 3G, depending on how good Apple’s encryption is on the Facetime 3G files. Considering how clever iOS developers are these days though, we have a feeling that a loophole will be made regardless if Apple locks it down anyway.

What are your thoughts on the potential Facetime over 3G feature on iOS 5? Are you worried about paying extra costs to use it?