We recently informed you about the release of iOS 4.3 beta 2 for developers, but now we have further indication that the public release is ready for download soon, as iOS 4.3 compatible Apps are now showing up in the App Store.

As reported from Engadget, an App by the name of StreamToMe by Matthew Gallagher can now be previewed on iTunes, and one of the features detailed in the latest version of StreamToMe, is the ability to support AirPlay video.

While this itself is nothing special, next to the description in brackets are the words (requires iOS 4.3), which suggests that Apple are now in the final stages of preparation for their next software update.

It also could be an indication that no major bugs or problems have been found within the beta tests for iOS 4.3, which is obviously a good thing for those wanting the update as soon as possible. You can check out a screenshot preview below, to see the proof yourself. Hopefully Apple will shed some light on iOS 4.3 soon, and give us a solid launch date to look forward to. 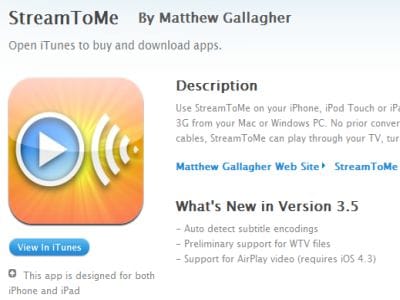 If you have spotted any similar hints to iOS 4.3 on the App Store, let us know. We’ll do our part by informing you of any further hints of a release, or new features that the update will bring.