Apple’s Airplay was a great feature for being able to push content to your TV via the iPad; iPhone and iPod but many families did not need that feature. The release of iOS 4.3 improved things, now the above portable devices can benefit from a feature that Mac and Windows computers had for some time with iTunes.

Home Sharing is a major improvement to iOS and streaming video, music, and more around the home. You can now pull movies from your iTunes Library to the iPad, iPhone and IPod although this is met with problems when it comes to kids.

Your iTunes Library could include 18+ content, which is not good if a child starts to watch a movie like this, so how do you go about setting a restriction for children? 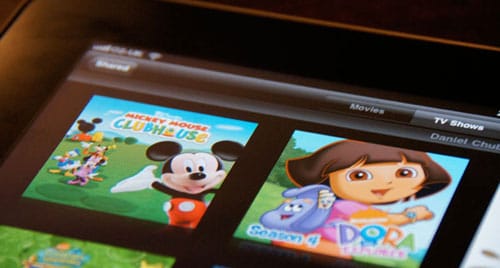 Could you imagine an 8-year old watching ‘Chainsaw Massacre’ via their iPad, this could easily happen if restrictions are not put in place for kids. One quick answer is to build up another library for the younger audience, but this may not be the answer for some, especially if space is limited.

What we would like to see is some “child control’ feature added to iOS 4.4, iOS 5.0 or the next version of Apple iTunes that makes setting controls unique to each Apple device. If you have any ideas we’ve missed, then please let us know in the comments.