We have some good news for those of you patiently waiting for the arrival of Apple’s iOS 4.2 software update, as we can reveal that applications with support for iOS 4.2 are now starting to appear on the App Store.

This can only mean one thing – the update is still due to land at any moment. Some of you had hoped that Apple would release iOS 4.2 on Sunday, but as we’ve told you in previous reports, a release on Monday 8th November is looking more likely.

As Pocket-Lint reports, eagle-eyed iOS users have now spotted certain applications which have been updated with support for iOS 4.2. One example of this is TheTrainLine app, as the screenshot below clearly lists iOS 4.2 compatibility as one of it’s new features. 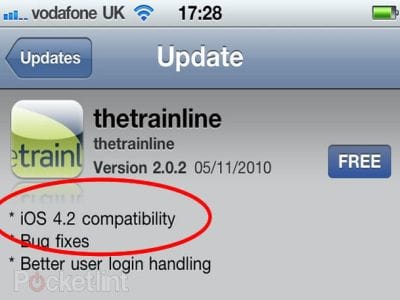 All that is left for Apple to do is release the thing – what’s the hold up? Have you spotted any other apps which have been updated with iOS 4.2 support?