iOS 4.2 is now live, which you may have guessed by the range of subjects covered on this update. The main features were AirPlay, AirPrint and finally multitasking for the iPad. However, one thing that did go unnoticed was the new text tones, but iPhone 3G / 3GS users have been left disappointed.

The reason for this is because they do not have these extra tones, which Phones Review helped point out. I should have noticed this when I updated my dad’s iPhone 3G last night, but did not even think to check if these new message tones were missing.

The heads-up to this issue was found by TiPb, and they can already see that iPhone 3G and 3GS users are not happy with Apple. It seems that this is another kick in the teeth for those who do not have the most up-to-date iPhone. 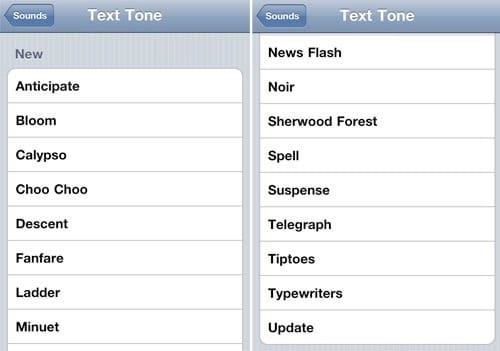 However, there are those who would argue that the new text tones are rubbish, and I would have to agree. How many times do we need to say that cheaper and older phones have better message and ringtone alerts?

iPhone 3G and 3Gs owners, do you feel as if Apple has screwed you over let you down once again?