We have some interesting news now for all you baseball fans out there, as we’ve recently received word that a new baseball management game for iOS devices has just arrived on the Apple App Store. The application we are talking about is the much-anticipated iOOTP Baseball 2011 game.

According to the itunes.apple.com website, the game has been receiving some pretty impressive reviews since it hit the App Store. In fact, the iphonegamerblog.com website gave the iOOTP Baseball 2011 game a perfect score of 5 out of 5 stars (see their review here).

The iOOTP Baseball 2011 game — which utilizes the same robust simulation engine as that found in the Out of the Park Baseball game for PC and Mac — features three different gameplay modes including Historical Replay, Fictional and Major Leagues. 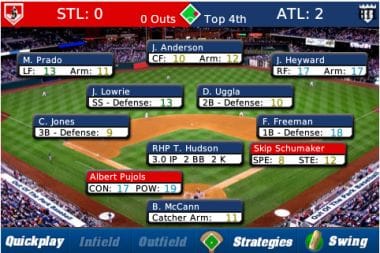 The Major Leagues mode enables gamers to choose a team and play out the 2011 season, while the Historical Replay mode allows players to choose one of three past seasons: 1923, 1965 and 2004, to see if the outcome is any different. Fictional will create one of three fictional baseball worlds.

Once players have selected a gameplay mode and chosen a team, they will then have to handle every aspect of managing it. Players will be able to manage their teams, decide when to bring in relief pitchers and pinch-hitters and even step into the General Manager’s shoes.

You can read more about the iOOTP Baseball 2011 game over at itunes.apple.com. Do you like management style games?