As you may already know, or if you read the news we previously brought you about The Daily coming out, it was released yesterday exclusively as an iPad app. It’s the first off its sort, bringing the national news to the public eye everyday through a tablet. Another first is that it comes with a yearly subscription on the App Store at just $39.99 a year or $0.99 a week. Fees are paid through your iTunes account direct.

Autoblog have reviewed the app describing it as visually stunning. They believe The Daily provides more than enough for its $0.99 price tag. They say enough ‘to keep you reading for an hour.’ You can see their whole review here.

The Daily is led by Publisher Greg Clayman and Editor-In-Chief Jesse Angelo and unlike daily newspapers, it offers an array of features including video, audio, photography, variety of text, touch interactivity as well as offering social feeds and real-time data. Some of the features above are included in a video from The Daily.com that can be watched below. 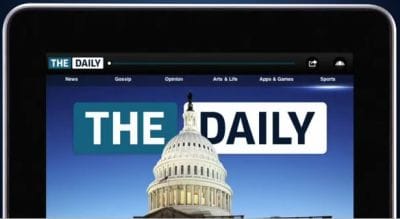 Chairman and Chief Executive Officer of News Corporation Rupert Murdoch believes The Daily will mold the future of ‘how stories are told and consumed in this digital age.’ Read the full press release here.
It is no surprise that an app like this was created seeing as over 2% of internet traffic comes from Apple devices. You can read more about this here.

Have you tried The Daily app yet? Let us know your thoughts?