It’s interesting how things unfold with buyers while they’re waiting for a new phone to release on their current network provider, and this included the wait for a Verizon iPhone 4, which those users wanted thanks to AT&T not being good enough for them.

Now it seems that Verizon Wireless is not good enough for users waiting for the HTC Thunderbolt release date on Verizon, with some people complaining about the network raising rates and the delay of HTC’s Thunderbolt. The bouncing between networks might not be for everyone, but we understand how waiting with delay after delay can get really frustrating.

Now it seems we’ve had some sort of explanation on these delays, although not official. One “tipster’ and those “familiar with the matter” offer confirmation that the Thunderbolt delay is due to problems with signal and battery life. These issues could be fixed by a firmware update, and are said to be so bad that the testers are taking a second phone around with them. 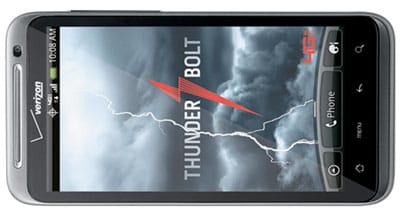 The spec sheet looks impressive, and it’s easy to see what some buyers see attractive, but its also good advice to wait for some real HTC Thunderbolt reviews after release. Once the Thunderbolt is released and the reviews are in, we’ll get a clear picture on any issues and hopefully the device will not fall into the trap of signal issues that plagued iPhone 4.

Have you waited long enough for the HTC Thunderbolt, or are you happy to wait longer for a solid product?