The launch of Internet Explorer 9 is seen as a huge deal for Microsoft, but we cannot help but think that they are playing catch-up to their rivals. We do not want to take the moment away from IE9 though; it looks set to move ahead of both Google Chrome and Firefox — but for how long? Rivals will not sit around for long before they offer updates to their browsers.

BBC News makes a point of the fact that Microsoft’s browser has been losing market share at an alarming rate, and the company believes that the RC that is now live and ready for download will leapfrog competitors. We find it interesting that during beta testing IE9 was downloaded 25 million times — wonder how long it would have been if Google Chrome had not been on the scene?

This release candidate is said to be the final stage to pick up any bugs before its public release, when that will be we do not know. ZDNet has been looking at some of the new RC features, and is its new interface will allow you to pause and resume downloads in the download bar. 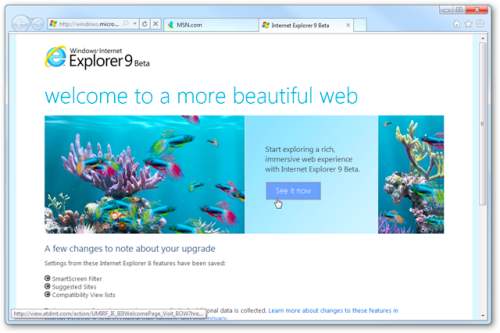 There are a number of other minor appearance changes, but the most important is the new privacy and security features. These are what users worry about the most, and it is no secret that Internet Explorer has been a little behind its rivals in this department.

To give you an idea of how IE9 RC looks then take a look at the video review below, which is the first feature complete release. Will you be downloading once the full version is made available?