Earlier on this month we had a look at one of Insignia’s 8-inch tablet models. Now though, it’s time to check out another of their product range – specifically the Insignia Flex 10.1 NS-14T004 tablet, with some reviews online suggesting that it’s well worth its price tag.

That price tag is now a pleasing $200, after we noticed that Best Buy are featuring the Insignia Flex 10.1 tablet as part of their ongoing Cyber Monday savings. That $200 price is obviously a lot cheaper than other 10.1-inch tablets on the market, but what do the specs look like?

Firstly, we can tell you that it is running on a 1.2Ghz NVIDIA Tegra 3-quad-core 4-plus-1 processor. There is 1GB of RAM on board and 16GB of storage which can be expanded upon with MicroSD card. With a Tegra 3 chip under the hood, that instantly opens the tablet up to decent gaming performance on the Google Play Store, with games such as GTA 3 which shouldn’t have any issues running crisp and smooth.

Operating system is a bit disappointing though, as there’s only Android 4.1.1 Jelly Bean on board. For $30 more you could pick up the Nexus 7 which comes with Android 4.3, but with an upgrade to Android 4.4 Kitkat available straight away. 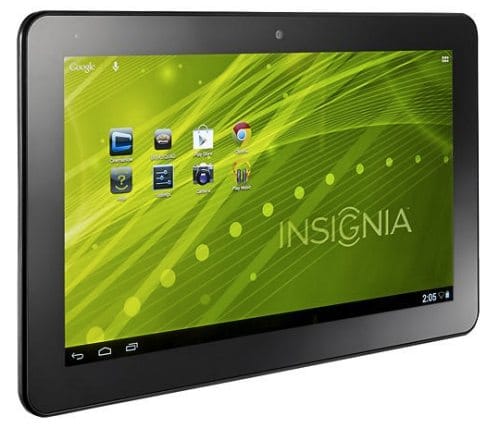 Nevertheless, the Insignia Flex 10.1 NS-14T004 tablet reviews have been very favorable. One of which is this review from PCMag which we have picked out for you. They have scored the Insignia 10.1 Flex with a 3.5/5 rating, saying that it offers solid value and a bright IPS display with smooth web browsing.

Read the whole thing and let us know if this is a tablet that you are considering this month. Do you think you could do a lot better for $200? Most consumers are still waiting for Google to drop the Nexus 10 2013 remember.