The moment all Apple fans and technology geeks alike have been waiting for is almost upon us and the coverage of WWDC 2011 so far has been immense before it’s even started. We previously brought you news of the various live blogs that are available on the net for those that wish to know what’s happening at the conference live.

It kicks off in less than an hour and from the coverage provided by Engadget and their live blog we can see the queue outside the venue in San Francisco where the event will take place, is an insane line that has apparently been formed for hours already.

All those in the queue, which you can see in the image below will be eager to find out what Apple has up their sleeve and will have the satisfaction of being one of several thousand people to be at the event where these events are unraveled. 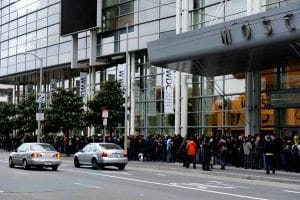 We already have an idea of what to expect from the event as the company unveiled their agenda last week which we previously brought to your attention. This does not mean there won’t be a few unannounced details to be showcased. This is what the experience of actually being at a conference like this is all about, witnessing the events exclusively.

What do you think of the coverage so far? Will you be watching the WWDC 2011 conference live?