When a new game is due to be released soon, you can always expect pre-order details to emerge in the build-up to the launch day. In some cases like the one we have here for you today, collector’s edition games are detailed before release. Today we have news of the Aliens Colonial Marines collector’s edition which looks to be giving fans a fair amount for the money.

The news comes from an image, that is reported to be leaked, which made its way onto French gaming website Gamekyo, although in situations like this is it often the publisher that is behind the details revealed, in this case SEGA. The image shows a fair amount of content is exclusive to those who purchase the collector’s edition including new game mode, unlockable weapons and a ‘highly detailed resin display model, complete with a limited edition display box and wrap around display.

There are three weapons that appear to be available to unlock, these are the M41A Pulse Rifle, M577 A2 Smart Gun and the M240 Flamethrower. According to the image these weapons will be available in multiplayer modes. The new game mode is called USCM Academy Firing Range, suggesting that it may be some form of tutorial level.

As for the resin display model, it represents a marine strapped into the classic yellow power loading suit, fending off an alien. While SEGA are yet to confirm how genuine the details are, the image itself looks legitimate enough. The game is slated for a spring launch time this year and will be available across all platforms including PC, PS3 and Xbox 360. Check out the image for yourself to see all the extra content that is expected to be available.

What do you think of this collector’s edition? Will you be purchasing it? 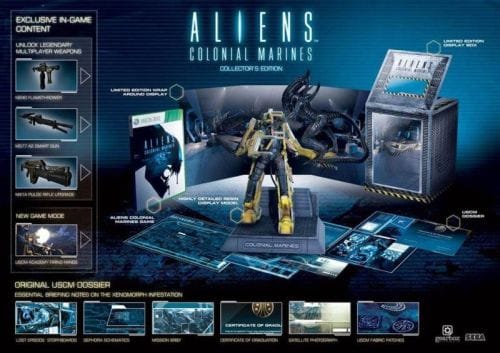