We have spoken to you a couple of times about the phenomenon that is Infinity Blade, the app that is grossing more than the ever popular Angry Birds and we also asked you which you thought was the better game. There is no doubt both games are ridiculously addictive but most of you were wowed by the graphical capabilities shown by the Apple iOS on the iPhone.

Now we want to inform you that there is are 3 DLC packs that are going to make their way to the iPhone’s Infinity Blade app. We read this over at Eurogamer where Fred Dutton has written an article on it. There is even a Facebook page for the game that you can keep up with the updates for here, just head over to the page and hit the like button to receive updates from them.

At the moment we know that there will be additional weapons 5 in total as well as 5 new helmets and 5 new shields. Not only that but they are adding in a new foe known as the Marrow Fiend pictured below and they are lifting the level cap and pumping it up to 45. Great news for all of those that are totally addicted to the game. 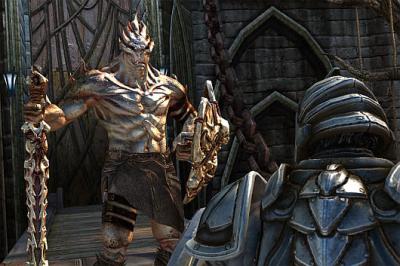 There are more things planned as well including additional areas to explore like dungeons but what I would like to see most is a multiplayer version of the game. Perhaps fighting against other players who have the game, with leader boards and stats. That would be fantastic.

If you are yet to download the game then you can head over to the app store and get it now by clicking here. What we are wondering though, is what would you like to see most added to the game? Is there anything missing that you feel would make an improvement? Let us know in the comments below.