Today we have some great news for Modern Warfare 3 gamers and a warning to anyone who is looking forward to the next Call of Duty game. The good news is that a new playlist will be hitting Xbox Live and the PlayStation Network very soon, the bad news is that a fake Call of Duty 9: Iron Wolf website has been set up.

Let’s start with information regarding the new playlist, we can reveal that the extremely popular ‘Infected’ game mode is coming to Xbox 360 and PS3 sometime today (Sunday, 5th February) and there’s also plans to bring this to PC – this will be available to ALL gamers, not just Elite subscribers! If you’ve spent time playing MW3’s private matches you will have come across this game mode, if not check out this link for a full explanation. If you head over to the Call of Duty forums you can see the thread which recently confirmed this news.

If you’ve been looking forward to Treyarch’s 2012 Call of Duty release you are probably hoping for World at War 2 or Black Ops 2 this November, however many believe that internally the next release has been codenamed ‘Iron Wolf‘ – recently a website with the following URL went live: ironwolfproject.com, we’re not going to link you to this site as it has been confirmed as illegitimate, but we’ve embedded a screenshot below. 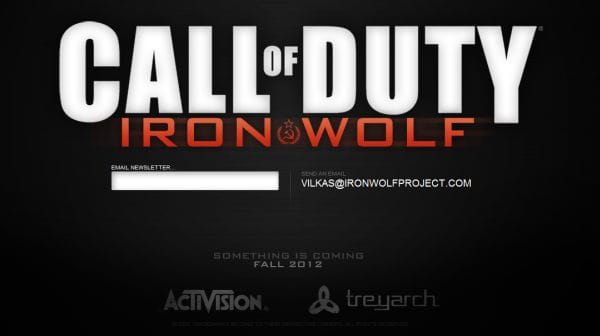 As you can see whoever set the site up is quite talented, the design looks very much like what we’d expect from an official CoD 9 website and it also shows Activision and Treyarch branding, however this tweet from the official Treyarch Twitter feed confirms that this is not affiliated with Call of Duty, Treyarch, or Activision.

On the fake website you can enter your email address to subscribe to an email newsletter, we highly recommend that you don’t do this as it could be part of a phishing scam.

Will you be playing the Infected game mode when it hits MW3’s public playlists?