One of this year’s most highly anticipated video games is undoubtedly inFAMOUS 2, today we can finally confirm the inFAMOUS 2 release date for North Americans, this was revealed on the official PlayStation blog.

The date that you have all been waiting for is June 7th (2011 of course), if you are a huge fan you may want to consider purchasing the inFAMOUS 2 HERO Edition, this should retail at roughly $99.99.

The Hero edition will consist of the game, a 8.5-inch Cole MacGrath statue, the inFAMOUS #1 mini comic, a sling pack, a super voucher which allows you to download in-game content and also the game’s soundtrack, you can see the contents via the image below. 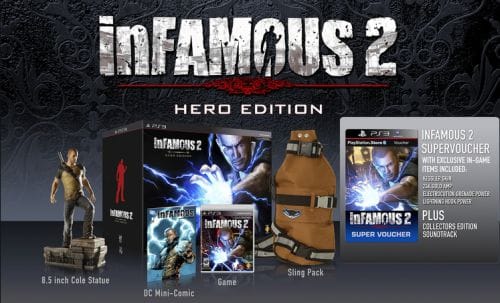 Sucker Punch Productions done a great job with the first inFAMOUS video game and it won numerous awards in 2009, you can see its many accolades here, IGN say that the game had the best script that year, whilst EuroGamer said it was the best action/adventure game of 2009, all in all it has to be said that this has set some very high expectations for the game’s sequel.

Will you buy inFAMOUS 2?