Looking at the spec sheet for the Sony Alpha A77 we know that the review for the new translucent DSLR will be very impressive, and 850 shots per charge from its battery is proof that Sony has made some major advancements. We say this because this latest version comes packed with a host of new technology, yet still they are able to squeeze out every last drop of juice from its power source.

There have already been a number of leaks regarding specifications and pictures, but Sony has offered yet more details ahead of its release. However, Engadget has managed to snag one and has an extensive hands-on preview of what they believe to be one of the best DSLR upgrades thanks to its mix of features and reasonable price bracket.

Times are a little tough right now, but this should not put off photographers, as the A77 will not cost you thousands of dollars like some other models on the market. You will be forgiven for thinking that you are looking at any DSLR, but once you take hold of it in your hands you will know that it is very different, as the device is very light — much like my A55, which I just love. 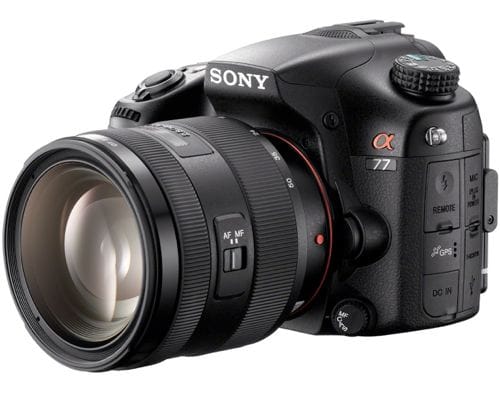 Do not let the lightweight design put you off though, as the camera still feels very solid — but what else would you expect from Sony? What will make the A77 stand out apart from its $1,999 with 16-50mm f/2.8 lens are its 24.3-megapixel sensor and the tilt/swivel LCD screen, which allows you to take those awkward shots.

However, the most impressive feature has to be its battery, as the Engadget team were able to shoot 858 images and 30 minutes of HD video, while also playing with a few of the camera settings on one charge. Expect to see the A77 hit the market in October.