Sony’s new PS Vita is undoubtedly their finest portable PlayStation to date. With near-PS3 graphics, a quad-core processor, multimedia features and more, it’s clearly a device that has a lot of potential. However, some bizarre omissions from Sony have led us to believe that we may have been better off waiting to pick up the US version of the device instead.

The general consensus when you pick up a device at the earliest opportunity, is that you do so because you have respect for the company, and want to show that respect by buying a device early. In turn, you expect that same respect back, and for all of you who are enjoying a imported 3G or WiFi Vita right now, may be wondering when Sony are going to put the finishes touches on a device that lacks certain features.

With the terrible one PSN account only issue aside, we’re a bit disappointed to see that Sony hasn’t really given importers much variety in the way of third-party applications. Earlier this week the device got a much needed firmware update which added Google Maps and video recording support, but we still don’t understand why they haven’t bothered to release a YouTube application yet, or a standalone Facebook app. The lack of a Facebook app is strange too, as if you head into the PlayStation Network settings of the device, you’ll see that Sony already has the option to display PSN content on your Facebook account, but there’s no app? What there is available right now is a Twitter app and a Flickr app, but really Sony should have put a little more effort into making more applications available to their dedicated importers. 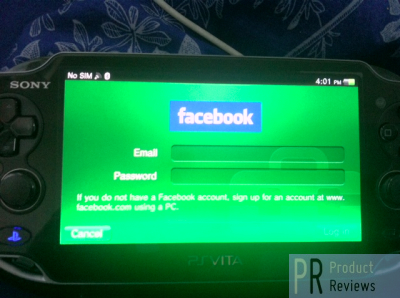 There’s no flash support either. This isn’t terribly surprising though, as we have just seen with the recent Chrome browser for Android, that Adobe aren’t really interested in supporting the mobile flash player any more, ever since Steve Jobs told them where to go. As for the software side of things, this is a more pleasing factor. There’s plenty of games and demos to download on the Asia PlayStation Store, but unsurprisingly, many of them are in Chinese or Japanese, with an English version of Uncharted: Golden Abyss being the pick of the bunch.

The lack of flash support and a YouTube app we can live without, as most of you who have imported the system will probably agree. However, reading the news this week about Sony’s flash AR cards left a bit of a sour taste in our mouths. Where are our AR cards Sony? – they definitely didn’t come included in the box. The company has announced that all PS Vita devices will get six cards free of charge at launch this month, but apparently those who took the time to import the system have been left out here.

Another nice little incentive for launch buyers is that everyone who picks up the First Edition bundle on launch day has the opportunity to get a free 8GB memory card with their purchase, at no extra cost – usually the bundle just comes with a 4GB card. Surprise surprise – this kind of deal didn’t happen for the Hong Kong PS Vita launch and we’re presuming it didn’t happen in Japan either.

Are Sony planning to accommodate importer buyers with the AR cards at least, or have early PS Vita owners essentially performed a beta test for Sony?