We recently showed you the debut trailer for PES 2013, but now EA has followed up swiftly with their very first details on FIFA 13. As expected, there’s a collection of new gameplay features, but we’re also pleased to see a collection of screenshots as well which give you an idea of how graphics have improved since FIFA 12.

We thought FIFA 12 looked pretty good from a graphics point of view, but FIFA 13 looks even better. In the initial screenshots released, we see player models of the likes of Lionel Messi and Robin Van Persie and to say they look good is an understatement at the very least. In the shot of Van Persie specifically, we’re amazed at the sheer quality of Manchester City’s Yaya Toure in the background – you can even easily pick out Zabaleta in the distance too.

Obviously there’s no sign of actual pitch graphics yet, but we can’t wait after seeing these closeups. We remember Konami saying that they have ‘returned to their roots’ with PES 2013 in a basic attempt to bridge the growing gap between themselves and their EA rivals, but on this evidence, they are going to have their work cut out once again if they are going to top FIFA 13.

Thanks to some information posted to Neogaf, we also have some initial details on some new gameplay features you can expect to see. Five categories have been disclosed so far, and they are First Touch Control, Player Impact, Complete Dribble, Tactical Free-Kicks and Attacking AI. You can read about each aspect over at Neogaf but we’re interested to know what you all think of the new difficulty added to the game when receiving the ball. According to EA, it will now be more difficult to receive the ball and it all depends on the weight of the pass, the ball height and also the relevant technical ability of both passer and receiver to determine the outcome.

It sounds a lot like the ‘PES FirstControl’ gameplay feature that Konami has brought in to PES 2013, so it will be interesting to see which plays out better when the games are both out in the Autumn. Take a look at the screenshots though and let us know your initial impressions of the game. Still hooked on FIFA, or are you willing to give FIFA 13 a miss this time around? 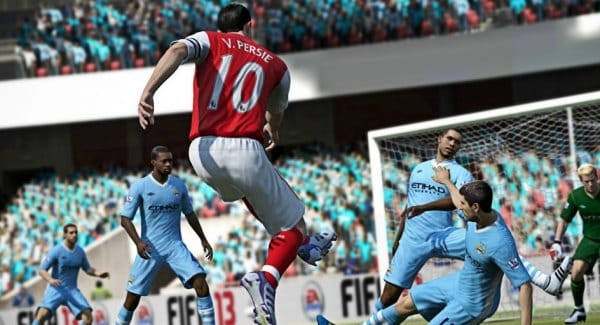