It looks like iMessage is not working properly once again, when it comes to sending messages from iMessage on iPhone to iMessage on Mac. Usually we would see both messages appear instantly, but the Mac iMessage sync appears to be having problems right now.

It’s not the first time it has happened either and we can confirm that the problems are happening on Mac OS X Mavericks. We’re not sure if this is due to the fact that we are on an older version, but it could be happening on Yosemite as well.

Apple has yet to issue a statement on this manner, presumably as there are not many users who have discovered the wonderful world of iMessages between phone and Mac yet. 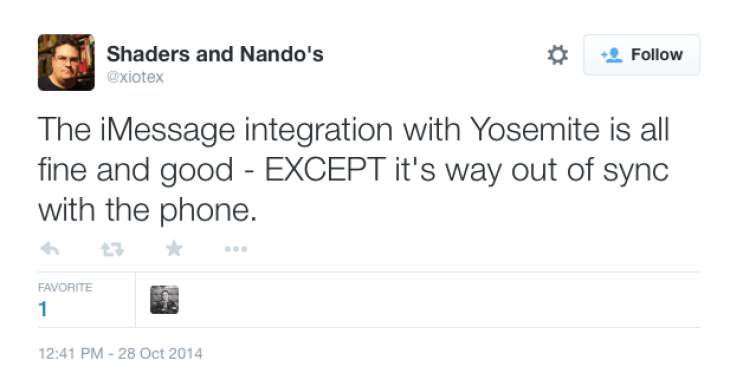 We remember when the last time this happened, the backlogged iMessages on Mac would be received on a MacBook Air or Pro around six hours later in one giant wave – so brace yourselves for that if you are in the same boat as we are at the moment.

Do you have any problems with iMessage not syncing with Mac right now? If so, let us know where you are and what Mac you are using. How long has the problems been going on for you and is it not the first time that it has happened?