If you have been waiting for the 2012 iMac for many months and followed the rumors surrounding parts and other stories from China, then you’d be really happy after seeing the new iMac model for 2012 but might wonder when the exact release date would be? Currently the 21.5-inch new iMac is shipping at some point in November, and the 27-inch version is exactly what our office iMac will upgrade to and this won’t ship until some point in December.

Today we wanted to focus on the storage options for the 2012 iMac, but if you’d rather watch all the features explained from the event, then you can do so in the video below this article that runs for just under 10-minutes.

For us the new iMac has to be the most drastically changed product that had been revealed at the recent Apple event, and while the iPad mini became the most talked about product, it is still only a slight change as far as features are concerned. The new 2012 iMac has changed in just about every way, and for us it stole the show.

2012 iMac storage — you’ll find that the new iMac features 1TB hard drives on all models, although there’s plenty of room for custom configurations. Optional changes include the ability to add up to a 3TB drive on the 27-iMac, or you could go for the option we’ll be testing in the coming weeks, which is the Fusion Drive that includes up to 128GB of SSD with a normal hard drive. 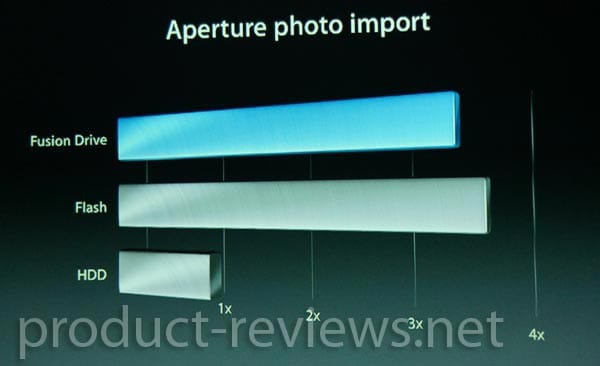 You can see the speed difference for an Aperture photo import in the image above, which shows how slow a normal hard drive is when compared to SSD. The Fusion drive option might be a little slower but delivers the best of both worlds, which is thanks to Mac OS Mountain Lion and the OS using the drive configuration more intelligently. The image below explains just how the Fusion Drive works, and as Apple puts it will deliver “high performance” with “high capacity“. 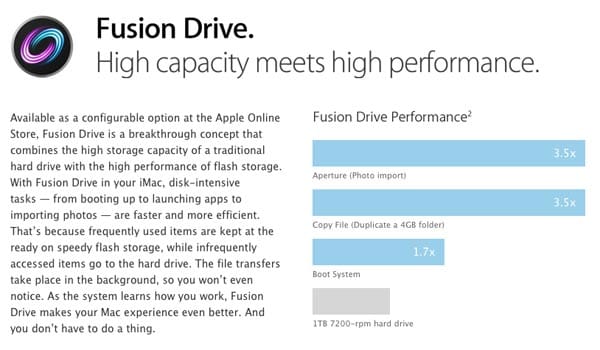 Are you unhappy that the optical drive has been removed from the 2012 iMac, or are you happy paying for an external drive? It is worth pointing out that some fans are a little disappointed that the optical drive has been removed already, and while they expected it to happen at some point, it is too early for some Apple iMac users. You can see the evolution of the iMac in the image below, which shows the latest 2012 model at the end.

If you have already decided to upgrade to the new 2012 iMac, then make sure you order early as Apple’s CEO has already stated there will be iMac shortages for the next quarter. We’ll update PR readers when Apple reveal the exact release date for the different models. The image below shows you the different storage configurations you have available for both the new 21.5-inch and 27-inch models