There’s an upcoming DotA 2 and Hearthstone eSports tournament that has entry conditions allowing only men to play, and this has caused outrage among both male and female gamers. The eSports Federation, aka IeSF, revealed the lineup for World Championship titles and these separated games into female and male competition.

This means men can play in DotA 2, StarCraft 2, Hearthstone, and Ultra Street Fighter IV tournaments. Women are only given the choice of playing in Tekken Tag Tournament 2 and StarCraft 2, although even if they wanted to play in the DotA 2 and Hearthstone tournament it’s forbidden thanks to being “only for male players”.

You can see a screenshot below that basically reveals the main tournament for Assembly Summer 2014, Hearthstone: Heroes of Warcraft, is open to male only and thousands of gamers can’t understand why this would be the case in online sports. 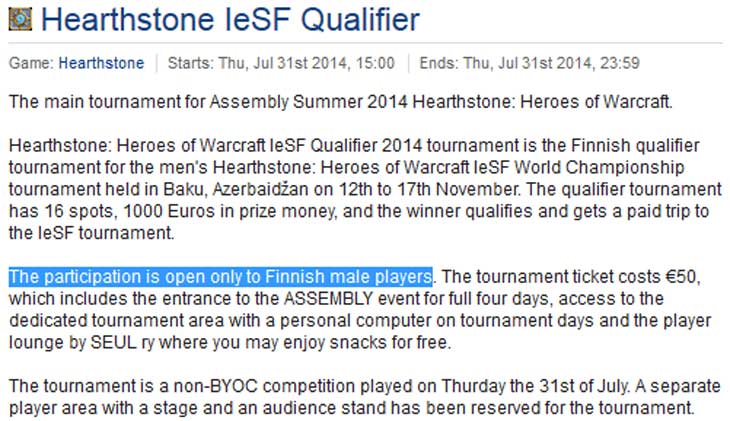 IeSF comments on outrage – there’s been an official statement released on the International e-Sports Federation Facebook page, which can be seen here and aims to justify why women shouldn’t be included in the DotA 2 and Hearthstone eSports tournaments. The main reason is due to promoting online sports as “legitimate sports”, although this didn’t go down well with a lot of the community.

Within the last hour the IeSF has published another Facebook message hinting at a change and you can read their updated message below. 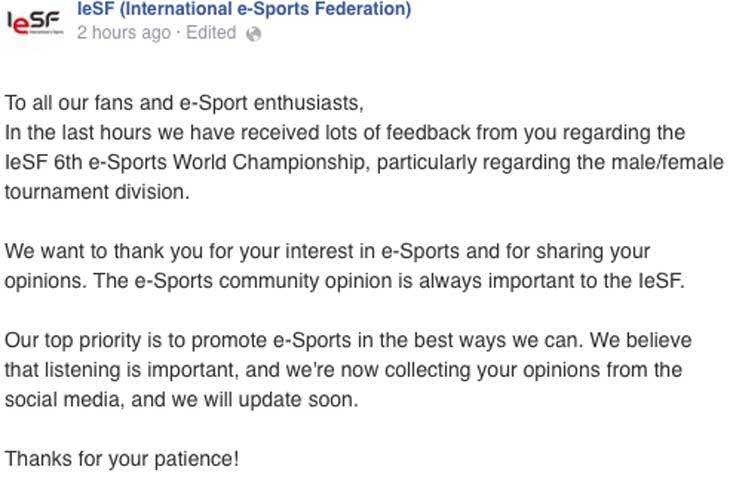 Do you think women and men should be able to play in the DotA 2 and Hearthstone eSports tournaments?