Now that you have updated your iPhone to iOS 5 and also updated your Mac to OS X Lion 10.7.2 you should now be able to use all of the iCloud features. The next step is to configure iCloud, most of what you need is ticked, all except iPhoto, as this is grayed out. When you read the help it says that you need iPhoto 9.2.

We were then left wondering what to do, so thought that we would just check to see if there was another update for OS X, even though we had just updated to 10.7.2. Strangely there was, and then it said that it was now downloading iPhoto version 9.2. Well this was a long way round, why did they not just update this with the OS X update? 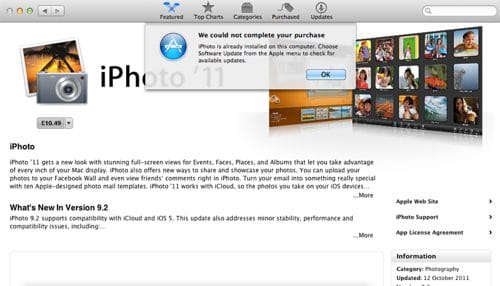 At least we did not have to rant at our readers saying that Apple was trying to con us into purchasing a new version of iPhoto in order to use the new iCloud service. The update also solved a few known issues, such as new swiping gestures, magnify view and much more.

Did you experience the same issue as we did?