We have some good news for those of you who are looking for a preview on Google’s next upcoming mobile operating system for Android. A few screenshots have appeared which show a few current Android apps that have been given an interface makeover for Ice Cream Sandwich 4.0.

The interesting thing to point out here, is that screenshots showing the preview of Ice Cream Sandwich have actually been taken on a Nexus Prime, Google’s next big smartphone launch after the Nexus S and the first handset in the world to run their new Android OS.

The images have been uncovered by the guys over at Android Police, and they give us an indication on how the Music app and Google+ app will look in Ice Cream Sandwich. First up is Google+ and it looks like the app will be updated to version 2.0 when it lands on Ice Cream Sandwich. The app looks largely the same, except for one main change – the Messenger icon has been revamped to something known as ‘Chords’, which we’re guessing will be something Google will unveil at a later date. Check out a screenshot of it below. 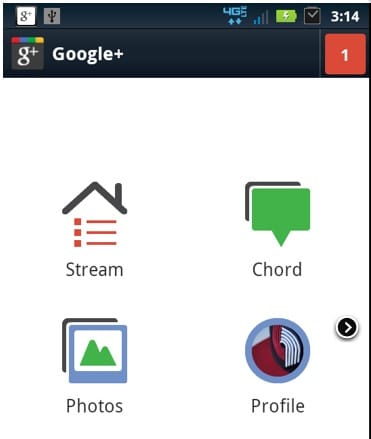 The second app is Music, and it has been updated to version 4.0.1 in Ice Cream Sandwich, compared to the current 3.0.1 version which is available on Android handsets today. New player controls can be seen in the images and the tabs are also more visually slicker as well. We have a feeling that you’re going to like the new blue color interface as well, as Google seems to have gone for the simplicity approach with the new ICS interface, and we like what we see.

If you want to see the screenshots of both apps, including information on how to get both Ice Cream Sandwich builds on your current device, head to Android Police here for the Google+ app, and here for the new Music app. After installing, let us know what you think of the updated versions – impressive or not so much?