Electric vehicles or EVs are fast becoming a popular choice when it comes to choosing which new car to purchase. More manufacturers are now producing them and although they are still fairly expensive in comparison to similar sized petrol engine cars, they are selling quite successfully. A new EV has been announced recently as Hyundai confirm their ix35 FCEV (Fuel-Cell Electric Vehicle) is to debut at the EcoVelocity show in the UK.

As ExpertReviews explains, FCEVs are an alternative to the common EV as they use hydrogen fuel cells to power them, leaving nothing but water vapor emissions, which are harmless to the environment of course. EVs however use a collection of batteries, which are charged from mains, to power them.

The Hyundai ix35 is the manufacturer’s third-generation fuel-cell electric vehicle. The company promises the fuel cell technology that these vehicles use is capable of functioning in cool climates as low as 25 degrees too. They also promise acceleration of 0-65mph in 12.8 seconds, top speeds of 100mph and a driving range of about 360 miles from one hydrogen fill.

Managing Director of Hyundai UK, Tony Whiteborn stated the company’s excitement about revealing the new vehicle at this year’s show. He also suggested the company’s aims saying ‘The ultimate goal would be to see zero-emission vehicles on UK roads within the next few years.’ He believes the market infrastructure will be key in determining whether this goal can be achieved.

If you’re interested in getting a peek at Hyundai’s new FCEV, head on over to EcoVelocity, which is being held at the Battersea Power Station from the 8th-11th of September. The company will also be showcasing their high-efficiency combustion engine vehicles, the i20 and i10 Blue.

What do you think of FCEVs? Will you be attending EcoVelocity? 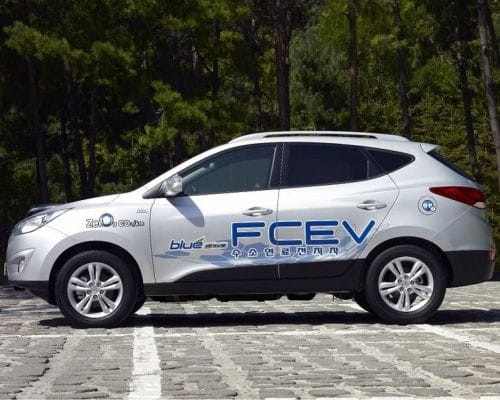