From the moment that Steve Jobs announced that their iOS devices would not support Flash, we assumed that web developers would have been much quicker in hard-coding HTML5 into their websites. There are still a great deal of websites that do not offer this support, so those with an iPhone or iPad have to put up with a load of blank spaces. There is a solution though, and it is called Hype and is an app for the Mac.

Two former Apple engineers developed the app; they decided to form a new company called Tumult. Their main goal was to benefit not only developers but users as well, and that was to address the issue about the lack of authoring tools for HTML5. According to 9 to 5 Mac this app takes all the hardship out of creating some of the visuals that we know and love, but not using Flash.

The cost of the app is $30, and is a small price to pay for what can be achieved. Hype Mac application must be good, as it is said to be Mac App Store’s top grossing program. What we love about this app — apart from it being able to increase the amount of HTML5 websites — is the fact that this start-up has made a success of themselves. We often hear that new companies try but never make it after the first 6 months to a year. 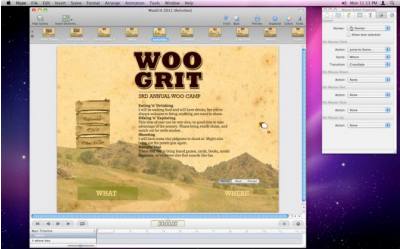 The main reason why the two guys got together to do this was the lack of tools available to build a HTML 5 rich website. The ones that were on the market were difficult to use — maybe this is the reason why Flash is still popular and HTML5 has been slow to catch-on?

If you are considering building an online magazine to utilize HTML 5, then Adobe Creative Suite 5.5 could be just what you need. More details on this can be found in our recent post.