We heard that Huawei would be showcasing the Ascend Mate at CES 2013, and this is exactly what they done and leave people wondering if the 6.1-inch smartphone is more of a tablet, or maybe just a hybrid we like to call Phablets? This device is certainly one of the alternatives to the upcoming Samsung Galaxy Note 3, or current Note 2, although the phablet suffers from the same storage problems at only 16GB rather than the much bigger options that most users want.

You would’ve seen a number of rumors previously but the official Huawei Ascend Mate specs are in, which include a less that expected 1280x720p HD display on a massive 6.1-inch screen, 1GB of RAM, 1.5 GHz quad-core Hi-Silicon K3V2 + Intel XMM6260, and running on Android 4.1.2 Jelly Bean. One of the major selling points is the 4050mAh large battery, which Huawei state will last up to two days with normal usage and should achieve 9 days of standby time. The Ascend Mate also features ADRX and QPC power-saving technology, and saves around 30% of battery charging time. 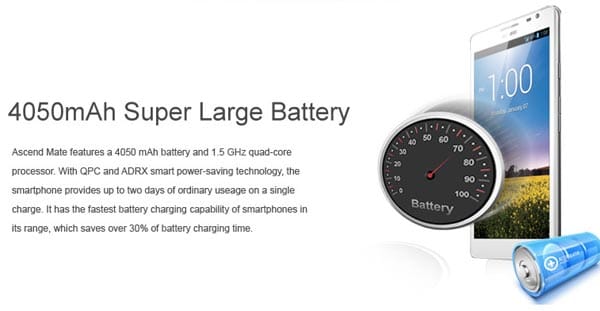 Huawei’s Ascend Mate weighs in at 198g and measures 163.5×85.7×9.9mm, which is far from small as the photo above reveals. You will also find a HD front facing camera for Skype and Google Chat, and around the back the Ascend Mate features an 8-megapixel AF camera with HDR and 1080p video. The bigger screen has many advantages like being able to move the on-screen keyboard to either the right or left for different types of users, although some people might not be able to handle such a large smartphone. You can read detailed information on the specs and features over on the official product page.

There’s no pricing or shipping date at the time of writing, but we expect the so-called smartphone to ship soon. It is also worth pointing out that the Huawei Ascend Mate features a custom skin over the Android OS, so we’ll have to take a closer look at this at a later date.