When it comes to tablets, one of the most popular models is the iPad, but for those that are in to Android and on a limited budget, many people tend to opt for a Samsung Galaxy Tab S2 because it is not only decently priced, but its features are not too bad for its price either. However, there are still many alternatives with Huawei being a fine example. Over the past couple of years this company has really started to pile on the pressure of its rivals, proving that you do not need to spend a too much money on a mobile device for it to have half-decent specs, along with a more than reasonable design – and the MediaPad M2 10.0 is a fine example of this.

We were given the opportunity to see first hand just what the 10-inch Huawei MediaPad M2 had to offer after being sent one for us to review. Ok, so we know that this particular model is now several months old, but from what we have heard in the past, it is still more than good enough to hold its own against certain rival Android tablets. If we are to believe the hype that Huawei was telling consumers, then this would be the best of the bunch for its price range, but we all know how much companies like this try to sell their devices – having said that, on paper and its design some of you may believe them even before getting your hands on it. 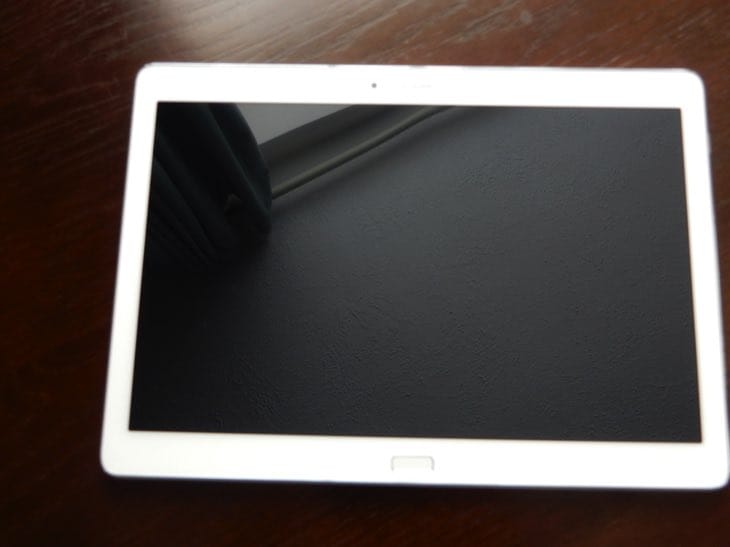 The tablet market is still at a funny stage, with sales not growing as much as those makers had been hoping for, but that has not stopped the likes of Huawei from embracing this market and offering consumers something different – well that’s what they have been trying to sell us. On first inspection it is hard to see where Huawei will make any difference with their MediaPad M2 10.0, as there is nothing radical in terms of its design. If you were to look at it briefly it does not look that much different to some of the other tablets on the market, although you will notice that their are four grilles, and yes you are correct, Huawei have given this partucalr tablet four speakers. 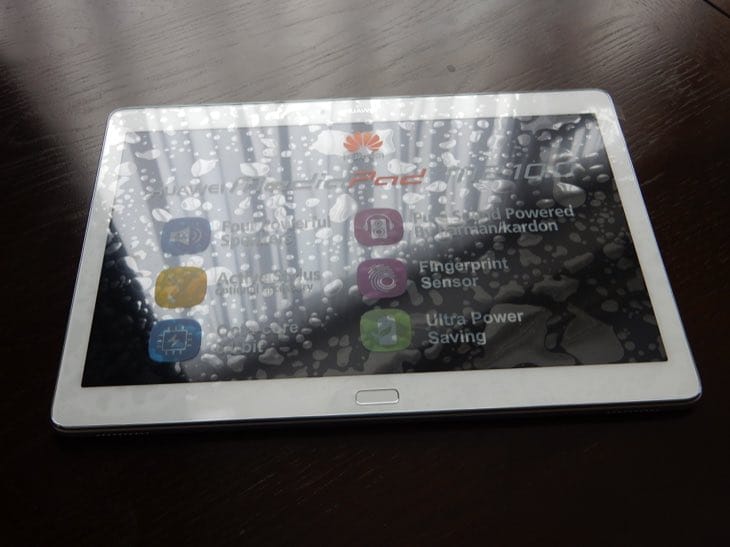 So let’s get this Huawei MediaPad M2 10.0 hands-on review underway. Let’s face it, in a nutshell its design is minimalistic, yet classy – some hint this is a huge surprise considering its price. Even though it measures just 7.3mm thin, its metal trim detailing does give it a premium feel, yet not enough thought was put into its weight and balance, as it can feel heavy (496g) after a while. We are also a little confused as to why Huawei went for the 16:10 aspect ratio, as it can often feel awkward reaching the home button, which also doubles as a fingerprint scanner when holding the tablet in landscape. To help set off the overall style of this tablet is the Stylus, although this only comes with the Premium model, and so we will have to leave that out of this review. 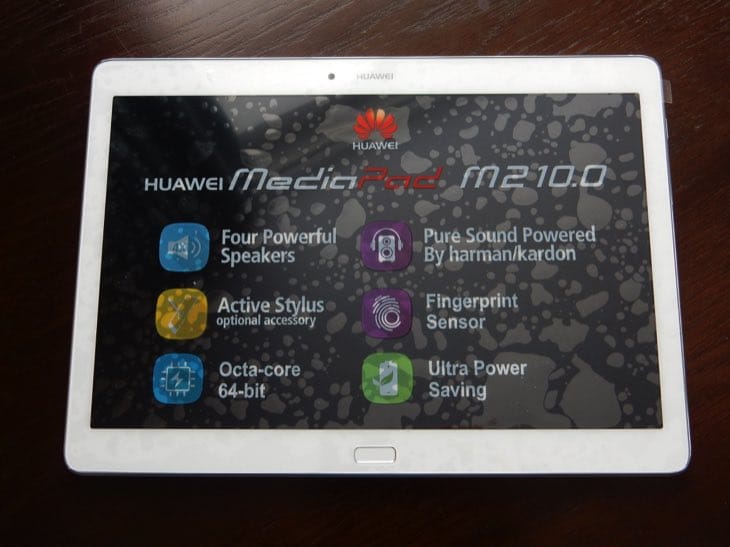 Before we offer any details on its performance and battery life, we thought it was worth having a little test of its display and sound to see what its likes to use for everyday tasks – and also the fact that Huawei make a point that its speaker system and audio software is the real deal. In terms of its display, it’s not quite Retina with its 1,920×1,200 IPS, 10.1-inch display, and so it is not going to knock you for six. We also found that its sRGB colour gamut coverage was rather underwhelming at just over 85 per cent, and so it feels left lagging behind its rivals when it comes to displaying colors accurately. However, do not let that put you off because the images are still vivid enough and is able to deliver some pretty decent details, and even the black levels are respectable.

As for its sound we did try out several different song types and have to say that while the sound quality was better than other tablets, such as the Nexus 9, there was still some distortion when played at a louder volume. Please do not let that put you off though because you have to remember that this is still only a tablet and therefore its size of four Harmon Kardon speakers are limited. Not only that, the listening experience was rather impressive, but not as clear as those four speakers you get on the 12.9-inch iPad Pro – although you do have to pay far more for that privilege. 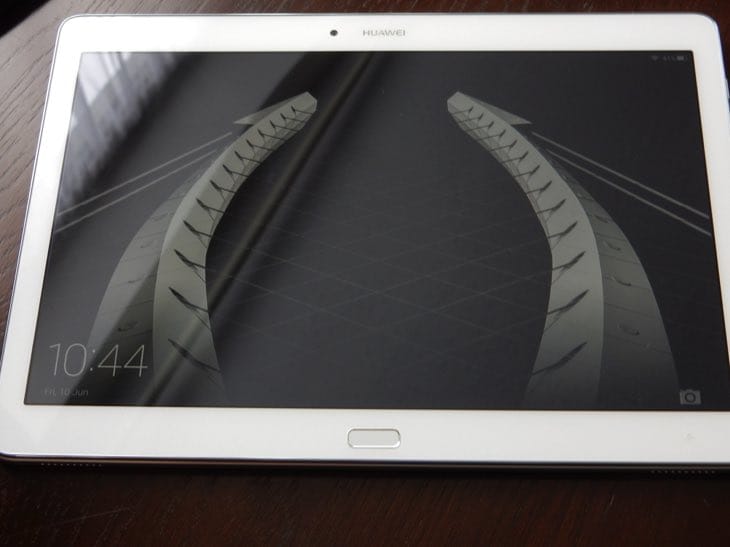 When using just for browsing and watching videos, the 10-inch MediaPad M2 is not too bad, but offer it up a game and that’s when the cracks start to appear. One of the reasons for this is because its choice of processors, as Huawei went for its own Kirin 930 chipset and quad-core 1.5 GHz Cortex-A53 CPU, although the Premium model does come with the Quad-core 2.0 GHz Cortex A53 instead. The model we was given had the 16GB storage and just 2GB of RAM, although we have heard that even with the more powerful CPU and 3GB of RAM, gaming is still a bit of a challenge.

However, we would not let that put you off, especially as not all of you play games on a tablet, as they much rather use it for looking on the Internet, playing music or even for use in the kitchen to follow recipes. If you really are into your games, then we would advise you to steer clear of this tablet, especially as the HiSilicon Kirin chipsets are usually plagued with poor graphics performance, even though the CPU itself it not too bad. Don’t get us wrong, some games do run ok, it’s just when you come to environmental animations and the like that things start to become a little jerky. 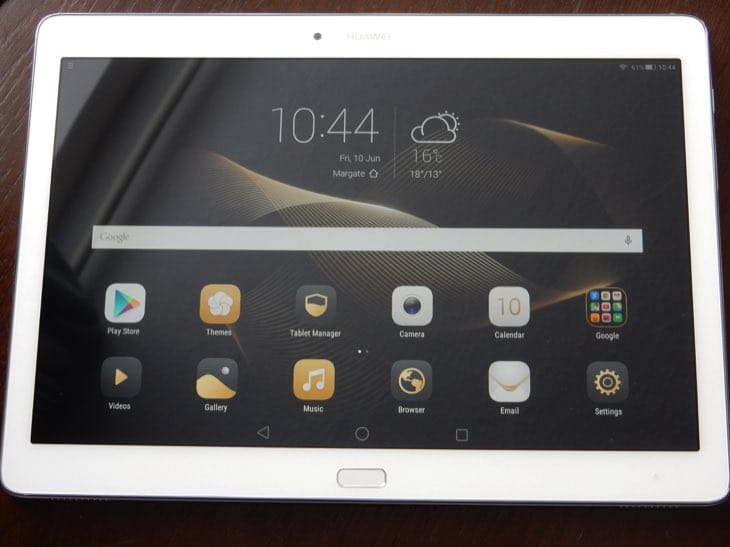 Battery life was a bit more of a surprise to us because it did perform well, even just playing videos with a standard brightness we got around 10 hours of playback from that 6,660mAh battery. Ok, so some of you might feel that more should have been possible from a battery with such a large capacity, but some of that has to do with software and the CPU itself. Browsing the Internet was almost the same, and we did manage to reach the 9.5 hour mark that Huawei stated. Oh, and upon further investigation we have found that the screen is one of the reasons that big battery does not last as long as it could have. 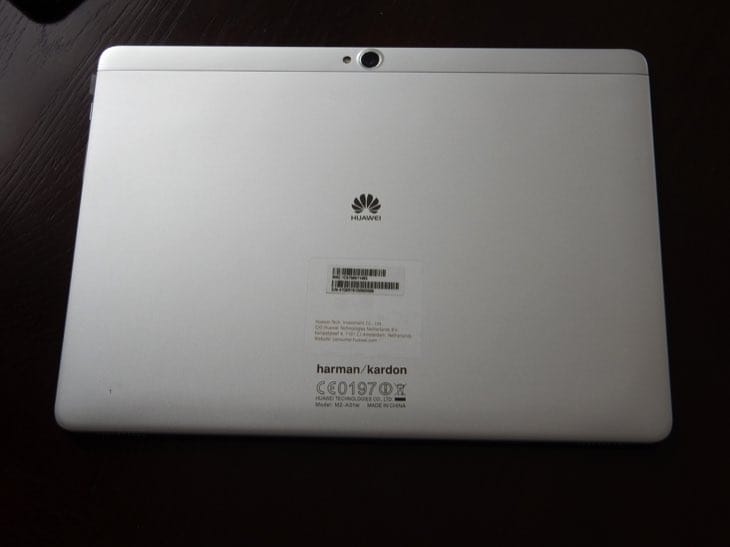 Back in the day of the first tablet devices the camera was an afterthought, as their makers assumed that people would not want to take photos with such a large device – and at that time they were correct. However, just like with the smartphone times change, although social media has played a big part in forcing tablet makers to improve the camera. This is where the MediaPad M2 is rather good, as its 13-megapixel rear-facing camera performs well. It is able to produce some decent outdoor images in daylight, along with low-lit indoor conditions as well – although within reason. We did find that when it comes to the finer detail, the 13 MP with f/2.0, autofocus, and LED flash camera did start to suffer, and don’t even try to take images with poor light conditions, as the result are patchy to say the least.

The front-facing 5-megapixel shooter is basic in terms of the quality of lens and sensor being used, although it does not do too bad of a job at taking selfies. One thing we do like though, and that is the Selfie Setting where you can actually take a few years off your life by clearing up those marks and wrinkles. Other features include Best Photo, HDR and Panorama. Anyway, do not let that put you off either because using your tablet to take shots is not for everyone, and you might get some strange looks when doing so out in public. 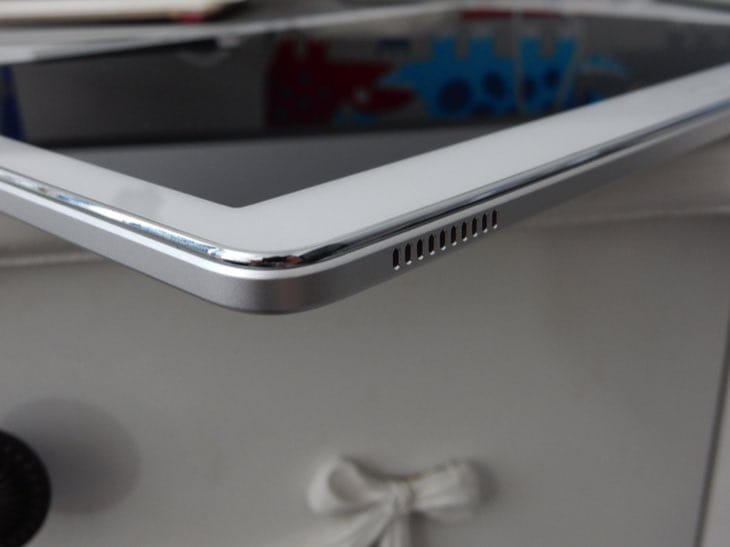 In terms of software we are a little disappointed that this tablet still only supports Android 5.1 in conjunction with its Emotion UI. First up it’s so frustrating that there is no Android 6.0 Marshmallow support by now, and let’s not get onto how frustrating the notification panel and settings shortcuts being separate are. We have tried the likes of Samsung and found their UI to be far easier to use, with many of the settings being made available right from the top. Ok, so we know that Emotion UI does give you some setting options, but nothing like Samsung’s advanced System UI. We have heard people getting over some of the flaws by installing other Android launchers, such as Nova or Google Now, but that’s a personal choice. 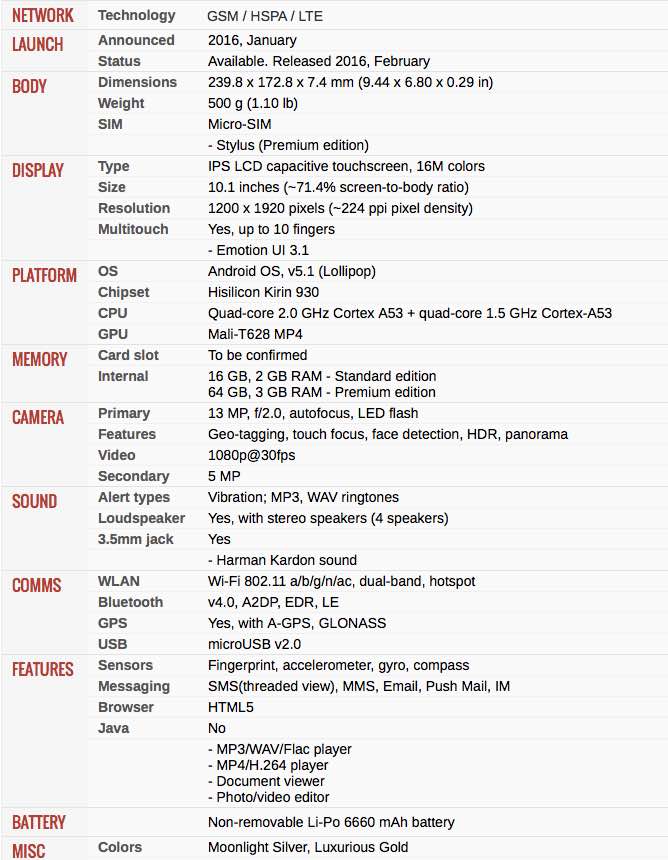 A full list of specs can be seen above; but if you are still undecided as to whether this tablet is for you, then you have to take a few things into consideration. First of all is the fact that while there are several shortcomings, there are a few good features, such as its sound and overall battery performance. Not only that, but you have to remember that you are getting a not so bad tablet from just £249.99 from Currys. You could opt for the Samsung Tab S2, which does offer 32GB of RAM, but you will have to part with an extra £100 and many of you will just not want to stretch the budget that far – even if it is more powerful as well.

Like we said above, the MediaPad M2 does suffer in terms of its hardware compared to the Samsung equivalent, but we could forgive Huawei for that if they were to just offer more attention to detail with its User Interface, along with finally bringing Android 6.0 to this tablet as well. 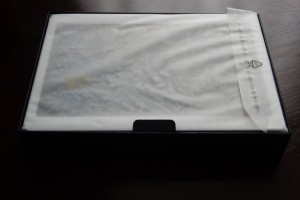 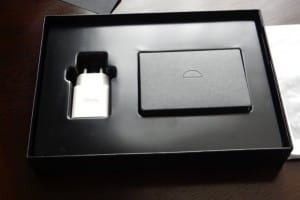 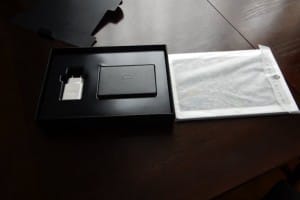 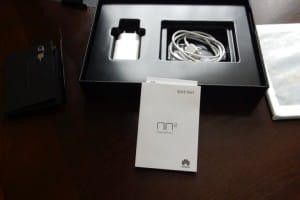 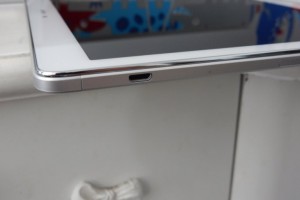 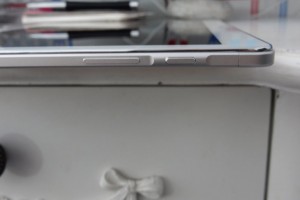