Time for a surprise smartphone debut from CES 2012 now, as you just knew that the event from Las Vegas would unveil a collection of new smartphones that would instantly turn heads. One of these is the Huawei Ascend P1 S smartphone, which may well turn out to be a surprise hit in 2012 thanks to Ice Cream Sandwich, which Huawei are confirming to be a stock version.

The elusive stock versions of Android, where would we be without them? Some smartphone owners felt a bit shortchanged when they found out the Galaxy Nexus on Verizon still shipped with pre-loaded Verizon apps, as well as a lack of Google Wallet, despite the handset carrying the ‘Nexus’ moniker which implied that the software would be untouched, like the Nexus S before it.

That didn’t happen, but for consumers that are still looking for a vanilla version of Ice Cream Sandwich, you’ll want to keep your eyes on the Ascend P1 S, as aside from stock ICS, Huawei are also claiming the handset to be the ‘world’s slimmest handset’. How slim you ask? Well a mere 6.68mm of thickness to be exact, which is even thinner than the lovely Droid RAZR which measures in at 7.1mm thick.

The handset will also boast decent hardware specs, such as a dual-core 1.5Ghz processor, a 4.3-inch qHD display with Gorilla Glass, 1GB of RAM, an 8 megapixel camera with 1.3MP front-facing camera and 1080p video recording capabilities. You’ll also be pleased to hear that the Ascend P1 S will be available in three colors, either metallic black, ceramic white and ‘cherry-blossom pink’.

As for a release, there is no solid release date yet but Huawei has stated that consumers should expect the handset to become available in the US sometime in April. The Huawei brand may not be that familiar to you, but does the fact that this is a stock Ice Cream Sandwich handset interest you? We’ll be keeping our eyes on this one for sure. 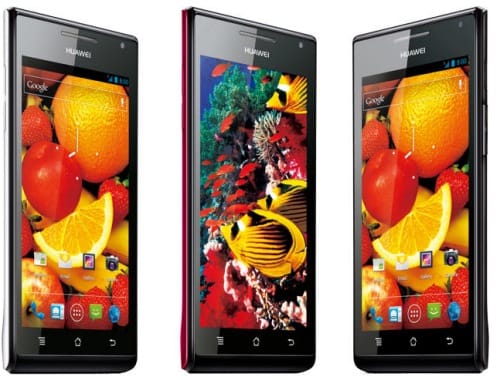