We have some exciting news for you now, as the first pictures have been captured of a mystery HTC Windows Phone 7 device. A name for the handset has not been revealed yet, but we do have some hints on possible US carriers.

As reported from Engadget, the device shown is thought to be a 3.7-inch SLCD touchscreen device, complete with a 1GHz Snapdragon processor and 8 Megapixel camera.

There are three pictures in total, each of them giving us a different look at the handset. We get a good look at the front and back sides of the phone, while a third picture shows us the Windows Phone 7 interface which is stripped down without the usual blue background.

Engadget is claiming that this handset could be on the way to two U.S carriers – those being Sprint and Verizon. They have also mentioned that this could end up being the HTC Spark, which was previously rumored for a release on Verizon.

Take a look at the pictures and let us know your thoughts on the handset. 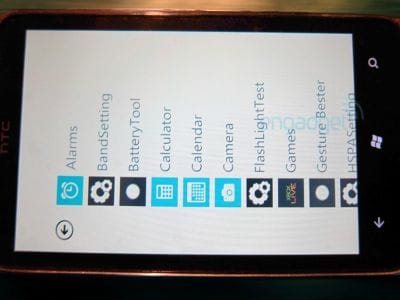