Last month we rounded up what SlashGear had to say about the HTC Wildfire S in their review, now Engadget has published its own review of the HTC Wildfire successor and we must say that it looks like the new device improves on many areas where the original model failed.

You can see Engadget’s review of the HTC Wildfire S here and the original HTC Wildfire here, as you can see the original model received a score of 6/10 and Engadget said that whilst the stylish design, great battery and affordable price were in its favor the poor video playback, low-res screen and lousy video capture were major reasons to overlook this smartphone, so what has HTC done to improve things this time round?

Well according to Engadget’s review the new Wildfire S is much better than its predecessor, that said it is not perfect. Engadget scored the Wildfire 7/10 and said that it boasted excellent voice clarity, a great camera (with LED flash) and solid build quality, however there are some imperfections such as its average battery life, its highly reflective display and its poor multitasking capabilities.

As mentioned in the previous paragraph the display is very reflective, in the photo embedded below you can see that in bright outdoor conditions its glossy screen is almost impossible to see, that said in the right conditions the 3.2-inch (480 x 320) display looks great and special mentions must go to its vibrant colors and impressive viewing angles. 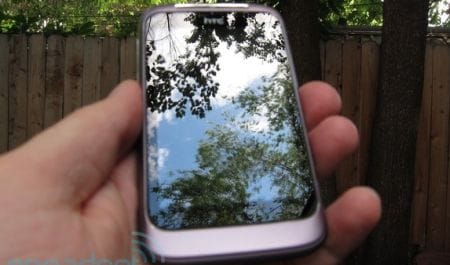 Engadget tested out the smartphone’s battery to see just how much ‘juice’ you got from a single charge, the 1230mAh battery delivered just 5 hours and 15 minutes of life when playing Lego Star Wars (on a loop) whilst having Bluetooth, GPS and WiFi switched on with the display brightness set to 50% and things like Facebook, Twitter and email configured to automatically refresh feeds. In a more life-like test the Wildfire S delivered over 30 hours of battery life from a charge, which isn’t too shameful.

The Qualcomm MSM7227 SoC’s 600MHz CPU seems a little dated in this day and age, especially as last year’s Wildfire boasted a 524MHz CPU, therefore we think it have been wise to perhaps feature an 800MHz (or better) CPU, this showed in the benchmark tests (see here) and Engadget say that it struggled when viewing websites with Flash content, also when using the camera application it was at times “sluggish,nearly to the point of being unusable”, which is a great shame.

Despite the software sometimes running slow the still photos taken by the Wildfire S are pretty impressive, a gallery of photos taken by its 5 megapixel camera sensor can be seen here, it is by no means groundbreaking, but much better than the first Wildfire.

One thing you have to remember is that the Wildfire S is by no means a high-end device, the Wildfire S is more affordable than HTC’s high-end offerings and also much smaller, therefore we are not surprised to see that battery life and multitasking capabilities disappoint a little, let’s face it HTC could have easily put a higher capacity battery in the Wildfire S along with a faster processor, but this would have no-doubt given the smartphone a higher price tag.

Remember to check out Engadget’s full review for in-depth information, will you but the HTC Wildfire S?