Every now and then we fail to talk about impressive upcoming smartphones, one which we are yet to mention is the HTC Vigor, currently this device has a lot of mystery surrounding it, however a recent Cnet article may have let the cat out of the bag, so to speak.

According to Cnet’s Scott Webster the HTC ADR6425LVW will be known more commonly as the HTC Vigor, it will apparently set a new standard when it comes to display technology as it will have a resolution of 1280 x 720 aka 720p, this means that along with the Motorola Dinara it will boast a HD display – neat eh?

This news arose thanks to benchmarks which showed up on the nena.se website, for those of you who don’t know these are the guys behind NenaMark1, NenaMark2 and Dino Madness Pinball, the latter being a game, whilst NenaMark1 is an Android benchmark for hardware accelerated graphics and NenaMark2 is similar but aimed at high-end devices. Anyway getting back to the matter in hand the image below clearly shows a device called the ADR6425LVW which has been benchmarked – as you can see it is Verizon branded, has a 1280 x 720 display and the Qualcomm Adreno 220 GPU. The smartphone is said to be running Android 2.3.4 and have a processor with a clock speed of 1.5GHz, could this mean it has 2 x 1.5GHz cores? We sure hope so! 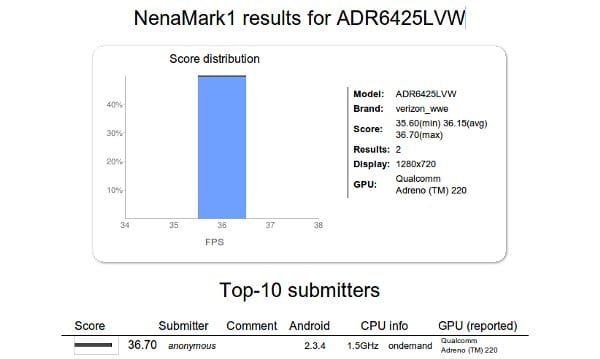 The image above shows that in the test it got a low score of 35.60 and a high score of 36.70, this gives it an average score of 36.15. To put this into some sort of context the HTC Thunderbolt, HTC Desire HD and HTC Incredible S all got similar scores, which suggests one of two things (or a combination of both), either it is an early firmware version for the HTC Vigor or it does in fact feature a single-core processor. To be honest we doubt the latter as we can’t see a single core processor-based device offering a 1280 x 720 resolution – can you?

As we hear more regarding the mysterious HTC Vigor we will keep you posted – do you think 720p smartphone displays are necessary?