We have some good news for Verizon customers now, as it looks like you’ll be getting an extra slice of Windows Phone 7 goodness with the arrival of the HTC Trophy, after recent pictures leaked online confirmed it’s existance.

An image of the device shows the HTC Trophy running on the Verizon network, obtained by Engadget’s unnamed source and you can view it below. 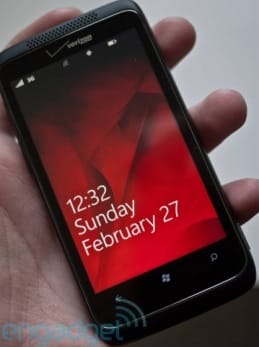 For those of you who aren’t aware, the HTC Trophy is a 3.5-inch device with key specs such as a 5 megapixel camera, 1Ghz Qualcomm processor, 576MB of RAM, WiFi and GPS.

Definitely not amazing specs there, but still good news for those of you who wanted to see it on Verizon when it was announced last year. Another bit of good news, is that the HTC Trophy will be coming to Verizon with the latest OS of Windows Phone 7, meaning that it will have copy and paste support amongst other things.

Are you interested about getting this device on Verizon or not? We’ve included a video below which shows some of the Trophy’s impressive 3D gaming capabilities.