Later today Verizon Wireless will be making a huge announcement, at the moment we do not know what this will be, however rumors suggest that we will either see the HTC Thunderbolt 4G officially unveiled, or perhaps a Verizon iPhone 5 announcement.

Back in December Verizon began rolling out its 4G LTE network, now it is thought that they will begin announcing 4G smartphones, but what will they announce today?

The HTC Thunderbolt will undoubtedly be a welcome addition to Verizon growing list of high-end smartphone offerings, with impressive confirmed specs and a extremely desirable look I would imagine that this handset could become the most popular Android handset available from Big Red, however an Verizon iPhone 5 announcement would be much bigger news. 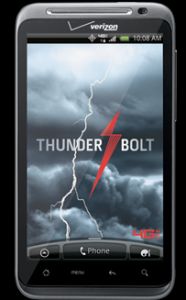 It would be fair to say that the AT&T iPhone 4 release didn’t go quite to plan, with reception issues and no white iPhone 4 release some customers have been extremely critical of Apple’s latest smartphone offering, therefore if Verizon were to roll out a new iPhone available in either white or black with no reception-related problems it would be have a massive affect on the smartphone market.

We would love to hear your opinion on the upcoming Verizon Wireless announcement, therefore feel free to answer the question below and share your thoughts in the comments section.