If you’ve been thinking about switching to Verizon Wireless or your contract is about to expire, but aren’t sure which of their Android range you’d like to get, we have some news that might interest you.

Verizon has been coming out with a lot of good, powerful phones, three of its best phones at the moment other than the award winning iPhone 4, are probably the HTC Thunderbolt, LG Revolution and Droid Bionic. Thanks to a chart at the Examiner, each phone’s features have been broken down and compared against each other so choosing which of these Android suits you best is easier.

All three of these phones have 4.3”, Flash, Swype and Video chat. Other features such as camera, battery life, and talk time are all included in the comparison chart which can be viewed here. 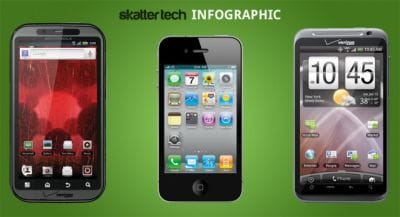 Another comparison chart has also been created by Scattertech. The article from Digital Trends says the info-graphic is great. Its comparisons include the HTC Thunderbolt, Motorola Droid Bionic and the iPhone 4. We also recently compared the Droid Bionic against the iPhone, Atrix 4G and Thunderbolt ourselves.

What do you think of these Android comparison charts? Are they enough to help you decide which phone you would choose? Let us know what you think.