We have some important news to bring you now, as it has been suggested that the upcoming HTC Thunderbolt smartphone on Verizon, won’t carry the ‘4G’ tag with it after all, as some new magazine ads have backed this up.

Over the last few weeks, we have presumed that the handset will come to market as the HTC Thunderbolt 4G and will be HTC’s first handset to support Verizon’s new 4G LTE speeds.

While the latter detail is still in tact, Verizon may cut the 4G tag off the end, as Android Central has managed to snap a screenshot of the upcoming handset featured in the latest edition of Rolling Stone magazine, which lists the device as ‘HTC Thunderbolt’, along with a collection of other smartphones, new and old.

From our point of view, it doesn’t really make a difference with the 4G on the end or not, since we all know that the device will support 4G speeds anyway. Does it add that extra style factor with 4G on the end for you though? Check out the full ad below and let us know your thoughts on the name change. 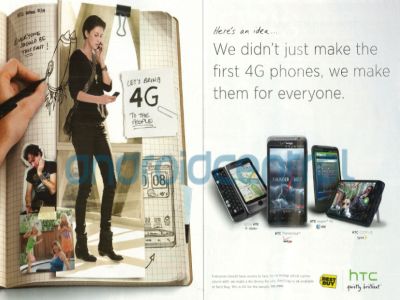