According to a brief article posted on AndroidPolice someone has managed to overclock the HTC Thunderbolt, as standard it runs at 1GHz, however the overclock allows the clock speed to reach a staggering 1.8GHz.

The overlclock sounds great, however it is doubtful that the Thunderbolt is stable at such speeds, chances are it will cause the smartphone to overheat and drain its battery much more rapidly.

Obviously there is one major pro that the overlclock allows for, speed, the image below shows how it fared when running the Quadrant benchmark test, as you can see it gets a score roughly twice as high as the Droid X and Nexus One managed. 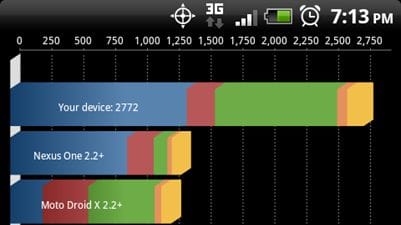 We have to remember that a benchmark score does not hold much weight when it comes to real-world performance, however it is nice to see what the Thunderbolt’s hardware is capable of, that said we doubt that scores would look that great alongside dual-core smartphones such as the LG Optimus 2X.

If you understand the risks associated with overclocking your HTC Thunderbolt all of the files needed to create custom ROMs can be found here, have you overlclocked your HTC Thunderbolt? If so what clock speed have you achieved without seriously affecting power consumption and stability?