The original news of a February 24th release came from talks which then pushed the date further a week, before a Twitter post suggested that the smartphone could be available March 4th. This was then confused as March 4th is a Friday not a Thursday. Whatever day it is, all these dates appear to be wrong, according to this new evidence.

The news is reported at Slashgear who say they were sent a ‘semi-anonymous’ tip, where the tipper left an alias, catalase name but still wishes to remain anonymous. The evidence of this March 10th release is a photo taken in a Best Buy store, of the line-up for the future inventory. 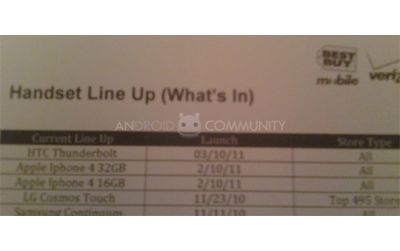 Both sites are suggesting that this tip is likely to be true as the tipper is remaining unknown and the date in the picture is very close to what has already been predicted, so a fake would seem pointless. Android Community insists the reason there has been so much speculation about the phone so far is because it’s ‘freaking awesome’. Check out the footage they got from CES 2011 which they have provided on their site here.

What do you think of the tip-off? Enough evidence to suggest we will be seeing the HTC Thunderbolt March 10th? Let us know your thoughts.